My brother Chris and I hosted a cousin reunion on Long Island in mid-December. I extended invitations to my old family—those I grew up with—and my new family—the cousins I have only recently found out about. My (new) cousin Eldad made sure to encourage the cousins on his mother’s side to attend. He also said he would bring “super kosher cookies” for the guests who are very religious and who might not eat otherwise.

I wanted to provide kosher food also, so Chris suggested we get everything at the Bagel Boss, a nearby kosher deli. But still, I don’t know how to serve a kosher meal in a non-kosher kitchen. So I did what most people do when they want to learn something. I got on the Internet and did a search for “how to feed kosher guests.” Several sites confirmed some things we had already thought about, like using paper plates and plastic ware. But I also learned some new things. There are many different degrees of kosher, but it’s best to keep the kosher food separate from the non-kosher food, and in its original packaging so guests can read the labels and know what kind of kosher everything is.

Trying to make my guests comfortable was important to me. Religious differences were at the heart of what divided our family, and the whole point of the reunion was to forge new links where old ones were severed.

Chris and I had fun selecting the bagels, cream cheese, fish, and salads at the deli. We talked with the owners, who assured us everything they have is kosher. They didn’t have a brochure we could take, so we photographed their kosher certification just in case. Even though we weren’t raised Jewish, we grew up on this kind of food. When I was eight years old, a bagel bakery moved in next to the local King Kullen supermarket. Mom loved bagels—we all did—and would pick some up every time she went grocery shopping. They’re one of the main things I look forward to when I visit Long Island—there are no good bagels in Tuscaloosa.

In addition to lox we got sable, which needs to be hand sliced to order. This takes special skill and only one particular clerk knows how to do it. I think we made his day. He rhapsodized about how supple and symmetrical the sable was, and held it up for us to admire. He gave us a slice to sample.

At the party store, we found a plastic knife sturdy enough to slice bagels, plastic serving spoons for the salads, and matching blue plates, cups, napkins, and tablecloth. Chris decided a large plastic bowl molded to look like cabbage leaves would be perfect for holding the bagels, and the ideal kitschy accessory to add to his serving ware. We set everything up on the side counter, separate from the non-kosher food in ceramic bowls on the kitchen table.

And then the pace of everything accelerated. We got a call from Aunt Pat that her son Marc was sick and they wouldn’t be able to come after all. The baby was fussy. Chris and others drove off on last minute errands. My first cousin Krysia and my husband Jeremy helped with final preparations. Before I knew it, guests were arriving. I never even had a chance to change into my party dress.

Anna, Miriam, and Susi (descendants of Abram, son of Jankel and Tema).

Elizabeth, who I grew up calling aunt, and Marsha (Eldad’s wife)

I have only two regrets. First, that Aunt Pat couldn’t be there. She is the one who set me on the path that led to my first connections with lost relatives. Pat is a professional genealogist who collected information about the family in the 1970s. At the time she knew or contacted many cousins. Her charts, records, and memories have been tremendous resources. My second regret is that I didn’t have the opportunity to talk as much as I wanted with everyone who did come.

The first to arrive were the Bellaks. Even though we are not related by blood, these are the people I grew up with. Elizabeth and Mama knew each other in Poland and found each other by chance years later while registering for classes at Teacher’s College in Manhattan. Elizabeth and George, with their children Andrew and Alexandra would visit more often than our biological kin. Elizabeth loves good food, and always comes with a bag full of goodies. This time, she whispered something to me about a ham. I didn’t think anything of it.

The Piwkos lived in Skierniewice. According to Aunt Pat’s notes, Jozef Piwko (1824-1912) was a successful businessman who ran a tannery that had been in the family for generations. And he had four wives. I’ve only been able to find vital records for two of them. Cywia Rajch (1828-1862) was the mother of Jechiel, Jankel, and Dawid (1862-1865). She died within months of giving birth to Dawid. Jozef then married Sura Burgerman (b. 1842) and they had a son Nusen Dawid in 1866 and a daughter Chawa in 1871. Sura was already deceased when Chawa married in 1891.

Nusen Walfisz (b. 1817), originally from Wyszogród, lived in Żychlin with his wife Pesa Losman (b. 1831) and daughters Hinda, Tema, and Łaya (b. 1864). Nusen was a belfer, a religious education teacher. 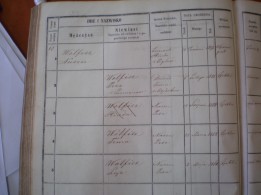 Żychlin book of residents, Walfisz family first half. Hinda, third from the top, was crossed out when she married and moved to Skierniewice.

Most of the cousins who came to the reunion descend from Jankel and Tema through their son Abram who moved to Zurich before World War II. Eldad (who came with his wife and daughter) is related to them through his mother Pouli. He’s also related to Jechiel and Hinda, my great grandparents, through his father, another Abram (though he’s often called Abrash). In other words, Eldad’s parents were second cousins.

Abram Piwko and family in Switzerland 1947

There is a lot of intertwining like this in the family tree—among the Piwkos, Winawers, and Kolskis especially. Two of my grandmother’s sisters married Winawers (Jacob and Liba’s granddaughter Joan came to the reunion with her daughter Jodi); another sister, Sarah married Sol (their granddaughters were supposed to come but had to cancel at the last minute), and her brother Abraham Jan/John married a Kolska (their great grandson Bob came to the reunion). Two other sisters married the Pinkus/Pinchas Kolski (after Regina died in childbirth, Rachel married him and had four more children). I’m still trying to trace how all the various Piwkos, Kolskis, and Winawers are related.

Rachel (nee Piwko) and Pinkus Kolski in Poland with their children

Some of the guests at the reunion are very religious. Susie (a great granddaughter of Jankel and Tema) called the day before to ask if there is an orthodox synagogue nearby. I didn’t understand at first, but she explained she needed to go before sunset. I gave her the phone number of a Chabad house that referred her to a synagogue just two miles away. She stayed in regular contact with them throughout the afternoon, and recruited several men from the party to make sure there would be a minyan for sunset prayers. It turned out there were already 10 men there when they arrived. Standing in the living room, another cousin remarked this is the closest she’s ever been to a Christmas tree.

Several cousins are artists—Miriam (Susie’s sister) used to do ceramics but now she prefers enamels, her husband Shiah does woodwork and fused glass. Arline is a painter. We’re also a well-educated bunch. Daniella is a historian and professor; Bob is a musicologist, curator, and librarian; my brother Chris has a PhD in economics; Sal’s wife Mira is a professor of political theory.

Arline is a straight talking 91 year old. She remains spry—going up and down stairs without assistance—and mentally acute. We tried but failed to work out how we are related. She believes that her husband (Harry Jacoby) was related to Tema Walfisz, while she descends from another Walfisz sister (maybe Łaya?). I looked on Ancestry and found a reference to Leah Walfisz. Could that be the link? Arline’s grandfather came to the US but her grandmother refused because she didn’t think it would be kosher enough.

Arline remembers my mother’s brother Philip, who ran the bakery that most relatives worked in when they first came over from Europe. She met Mama and Babcia at Philip’s when they first arrived in the US. Mama was withdrawn, maybe even anti-Semitic. Arline remembers Mama comparing blacks in the US to Jews in Poland. Babcia babysat for Arline’s children, and also sold handkerchiefs to all the relatives. That’s how she earned money when she first got to the US. 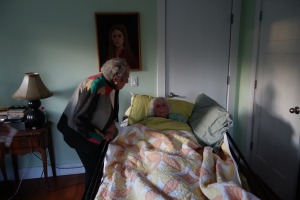 I went with Arline when she visited Mama who was in bed in her room. At first Mama did not remember her, which is not surprising considering seventy years have passed, and Mama sometimes doesn’t recognize me anymore. Only later, after Arline talked for a while, Mama recognized Arline’s voice. Arline was explaining that her parents (or was it her husband’s parents?) were with Philip when he died. They had attended a wedding in Massachusetts together, and were on their way home when the car ran off the road.

I had hoped that this reunion would be an opportunity for my old family (the one I grew up knowing) to meet my new family (the relatives I have only recently learned about). The super kosher cookies and the sliced ham represent some of the challenges of making that a reality.

I never got around to eating so I didn’t see the ham on the table until after everyone had left. At first I was upset. I had worked so hard to make our kosher guests comfortable and I didn’t want to offend anyone. It struck me as so stereotypical and even mean spirited to serve the food that symbolizes the opposite of kosher. But it turns out no one deliberately meant the ham to represent anything. Elizabeth handed it to my husband, who found a plate and set it on the table without a thought about what it might mean to anybody. And in retrospect, it was probably just as well. Intent aside, maybe some of my old family felt more comfortable because the ham was there. Just as some needed the kosher cookies, maybe eating the ham was for others a normal part of not being Jewish, or of no longer being Jewish, or of not keeping kosher. I don’t know for sure, because I didn’t ask anyone, nor did I pay much attention to what people ate. And, as a friend remarked later, with ham on the table no one had to wonder what food wasn’t kosher.

Bridging the divides forged by my grandmother’s conversion will not always be easy. It’s complicated. But we’re family so we’ll figure it out.