“Why should we learn about Judaism?” Mirosława Maćkowiak asked, gazing kindly at my son’s 5th grade class. The twenty-five ten-year-olds sat in chairs in the Jewish Gallery of the Leszno Regional Museum, which is housed in the former synagogue. I hurried to translate Maćkowiak’s question; the language of instruction at the International School of Poznan is English, and only some of the students speak Polish. Maćkowiak, the curator of the Museum’s Jewish collection, answered her own question: We should learn about Judaism because Jesus was a Jew. He celebrated all the Jewish holidays, followed all the Jewish laws, and dressed like a Jew. It’s important to know about the older religion from which Christians came. Judaism is that older religion. 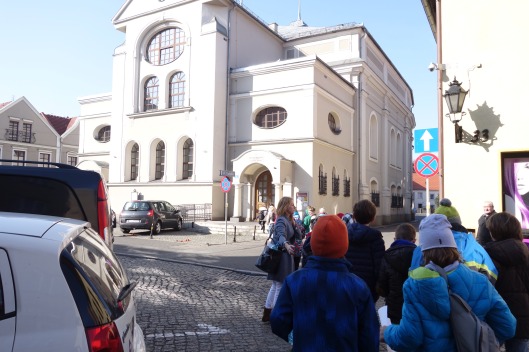 ISOP students heading to the museum in Leszno, 2015.

Ian’s teacher, Ms. Ania grew up in Leszno, which is about 50 miles south of Poznan. Blond, with the perky beauty of a cheerleader, she is perhaps the only Pole I have ever met who openly declares herself an atheist. She developed a special interest in Judaism after getting to know some Jewish people in London. She lived on a kibbutz in Israel, where she absolutely loved the country and the people. When she returned to Poland, she made a point of learning more about its Jewish history. She brings her students to Leszno every year so they can see artifacts that once were part of the Jewish life that filled the city. She said there isn’t really an equivalent space in Poznan, where the historic synagogue housed a public swimming pool for years, and closed to the public in 2012.

Ania and Mirosława have known each other for years, but each has a very different perspective on religion. Both are positively oriented toward Judaism, and celebrate the historic cultural and religious diversity of Poland, but Mirosława also makes the assumption that the Polish nation is Catholic, and so legitimizes Judaism for her young Polish audience by linking it to the origins of Christianity. Segments of the Catholic Church promote the perspective that Jews are “older brothers in faith, as I witnessed during Judaism Day, which has been a holiday of the Polish Catholic Church since 1997.

During our visit, Ania kept reminding Mirosława that her students were not there to study Judaism from a Catholic theological perspective. “Not all of my students are Catholic,” she insisted. When Ania took a turn translating, she distanced herself from statements framed in a Christian perspective by prefacing them “According to Ms. Mirosława.”

Jewish memory work in Leszno shows us a few things about what can be done with Jewish heritage in Poland. In Leszno, important tangible heritage survived the war, providing a foundation for building public awareness about the history of Leszno’s Jewish population. Additionally, a local institution, the Leszno Regional Museum (Muzeum Okręgowe w Lesznie), became active in historical preservation right after the fall of communism, making Leszno one of the first communities in Poland to renovate Jewish structures, mount Jewish-themed exhibitions, and organize related public events. A central cornerstone of museum activity includes programs for school children, such as the one attended by my son’s class.

Leszno is a regional center with a population of about 64,000. More than a century of Prussian rule contributed to German cultural influences, and in the mid-19th century, the Jewish population began to emigrate to other German cities. By 1923 the last Leszno rabbi departed and was not replaced; only 160 Jews remained in Leszno. When Leszno was absorbed into Hitler’s Third Reich, the few remaining Jews were forced to move to places further east and then became victims of the Holocaust.

Besides the synagogue, several other buildings remain of the city’s Jewish past: a mortuary building where bodies were prepared for burial, now the public library; a mikvah; and multiple houses within the narrow, winding streets of the Jewish district. Little remains of the cemetery, on which socialist-era concrete apartments were built in the 1970s. Some tombstones have returned, however, rediscovered in farmyards and under roads, and now wait in a pile outside the mortuary building until someone gathers the funds and the initiative to create a lapidarium. 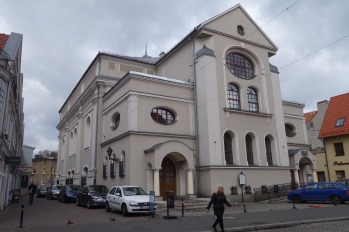 Mortuary building, Leszno. Apartments behind it were built on the Jewish cemetery 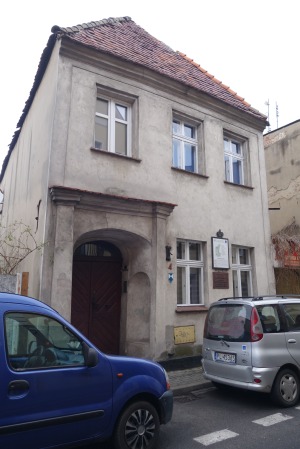 Old House of Prayer, dating from the first half of the 18th century, Leszno Jewish quarter

The Leszno Regional Museum’s impressive collection of Jewish sacred and everyday objects are mostly on loan from other regional museums. They are arranged in wood-framed glass display cases, each containing objects associated with a religious holiday. A laminated sheet on top of each case describes the historical and religious significance of the holiday, typical activities and meals, as well as characteristic objects associated with the holiday. For instance, one case contains artifacts relevant to Hanukah, mostly nine-candle menorahs called hanukiahs. The written description explains Hanukah, the Holiday of Lights, is “the eight-day holiday commemorating the triumph of Judah Maccabee against the Syrian army in 165 BC….” and explains, “Each day a successive candle is lit.” Words like “hanukiah,” “gelt,” and “dreidel” are written in bold, followed by their definition and their significance for the holiday.

Students meet Mirosława Maćkowiak, Director of the Jewish Division of the Leszno Museum, in the former sanctuary of the synagogue

Maćkowiak, Director of the Jewish Division of the Leszno Museum, discusses Jewish religion and culture. On the wall hangs an ornately embroidered parochet, a curtain that would go in front of the wooden cabinet containing the Torah scrolls. 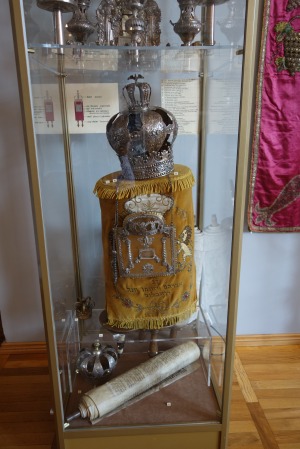 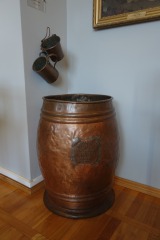 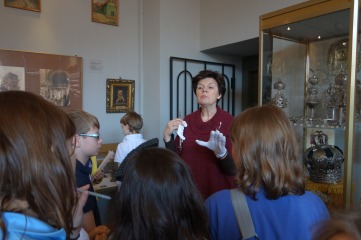 Maćkowiak explains to the the children how to use a yad, a Torah pointer, Leszno Museum.

Another case labeled “Shabbat table” contains silver cups, goblets, spice towers, candlesticks, a tray, and a knife, all arranged atop a white linen cloth. Two loaves of challah covered with a white cloth complete the display. The information sheet says, “Shabbat (rest) is the most important weekly Jewish holiday, in which there is an obligatory restriction on doing any kind of work. It begins on Friday at sunset and ends on Saturday at dusk. It is a joyful holiday.” It goes on to describe how candles are lit by a woman, while the father of the family says a prayer called kaddish (written in bold). Further, it explains that herbs are placed in the spice tower (bessamin, the Hebrew word is written in bold) and lit on fire. It describes typical Shabbat food, including challah, chicken soup, and the single-dish meal for Saturday dinner called cholent (again, this term is in bold).

The texts signal continuity over change. Jewish culture is portrayed as something that does not modernize. But this emphasis on normative customs also relegates Jewish culture to the past. The objects on display are old, most dating back to the 19th and early 20th centuries. While many of the objects, such as hanukiahs and Shabbat goblets, have contemporary equivalents that remain part of standard Jewish cultural and religious practice, other objects on display are artifacts of a former era. For instance, one of particular interest to the ten-year-olds on my son’s fieldtrip was a massive copper barrel set on the floor in a corner. Mirosława Maćkowiak explained that it would have been placed at the entrance of a mortuary building or some other place where it was customary for Jews to wash their hands. She pointed to two two-handled containers tacked to the wall above the barrel, and said they would have been used to scoop out and pour the water. She related this practice to the importance of cleanliness in the Jewish tradition.

Maćkowiak made similar generalizations about the value Jews placed on education, their kosher dietary practices, as well as the kinds of activities restricted on the Sabbath, such as cooking or turning lights on or off. She made no mention of the fact that many contemporary Jews dispense with these practices, nor did she discuss historical variation among Jewish populations. Even though Mirosława Maćkowiak talked about Judaism as a living religion, still practiced by millions of people worldwide, the static portrayal within the museum exhibition reflects the absence of Jews within contemporary Polish society.

My son’s class, when given the opportunity, gazed at the articles in the display cases with curiosity. Of far greater interest to them, however, was the hands-on demonstration by Maćkowiak in front of a two-meter tall display case intended as the focal point of the room. She explained that this was meant to evoke the most sacred part of a synagogue—the Aron haKodesh, where the Torah scrolls are stored. She pointed out the parochet hanging on the wall to the right of the case, explaining elaborately embroidered curtains such as this would cover the front of the wooden Torah cabinet. She pointed out the items in the case, including a silver crown set atop a fabric Torah cover, as well as some Torah scrolls wound around wooden dowels. Then she put on white archivist gloves, and took out a silver yad with a pointing end shaped like a tiny hand with its index finger extended, and demonstrated how such pointers were used to read the Torah from right to left without touching the parchment.

My son’s class was not the traditional school group. Their teacher brought them as part of a unit on world religions, where the emphasis was on cultural and religious diversity. By contrast, most school trips are initiated by religion teachers.

In most cases, religion is taught by Catholic clergy during the regular school day. This is an artifact of a law passed in 1991 in reaction to the Communist rejection of religion. As a reassertion of the centrality of religion for the Polish nation, religious education in schools became standard. Over the years, many have complained to me about it, but very few go to the trouble of filing the necessary paperwork to have their children attend “ethics” classes instead. After all, 90% of Poles identify as Catholic, and children risk ostracization if they are singled out like that.

Notably, this law passed at the same time that Jewish heritage work came out of the shadows and spurred public projects like the one that established the Jewish exhibition in Leszno. Poland is a complicated place, and relations between Jewish and non-Jewish Polish culture and history are a fundamental knot at the center of that complexity.