The Stare (Old) Podgórze district of Kraków, nestled between the Vistula River and the hilltop Bednarski Park, has experienced an incredible resurgence over the past several years. What used to be a neglected part of the city, with crumbling townhouses and drunks who congregated in the town square, has become the home of restaurants, cafes, galleries, and museums. A new pedestrian bridge links Podgórze to the heart of Kazimierz; the rhythm of footsteps over the pedestrian walkway causes sculptures suspended from wires to totter like the acrobats that are depicted.

Sculptures of acrobats suspended on wires, by Jerzy Kendziora.

A biker pedals by a sculpture of an acrobat suspended on wires, historic Podgórze in the distance.

The pedestrian bridge between Podgórze and Kazimierz, Krakow.

Old Podgórze is also the place the Nazi governor Hans Frank selected for the Krakow Jewish ghetto on March 3, 1941. “Within two weeks, 18,000 Jews were ordered to move to 320 buildings, whose ‘Aryan’ residents had previously been forced to vacate.” [1] Presumably, the district was selected because of its distance from the center of town, further isolated on the other side of the river. By March 20, Podgórze was closed off by a high brick wall; whether the symbolism was intentional or not, the undulating curves along the top edge evoked Jewish headstones stacked side by side. The ghetto shrank in 1942, when residents were taken to their death in camps like Bełżec, and was completely liquidated on March 13-14, 1943. The ghetto existed just two years, but the fact that it existed at all in this very place clashes uncomfortably with the district’s rebirth.

I have written about Podgórze before, and about the way the district captivated me. In fact, I’ve sometimes remarked that if I were to buy an apartment in Krakow, I would want it to be in Podgórze. But that was before I knew what happened there during World War II, before I started to explore my Jewish heritage, before historical markers brought difficult history back into the public sphere, and before the phantom walls of the ghetto became part of my inner map of the district. When I visited Krakow earlier this summer, I decided to rent an apartment in Podgórze to get a better feel for the place. Could I live there, knowing what I now know?

I found a place right in the heart of what used to be the ghetto, in a newly renovated building right beside a ruin, and across the street from the iconic red brick mikvah building that now houses one of the city’s most prestigious art galleries. 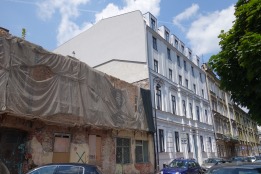 I took long runs past St. Joseph’s Church on the Podgórze Market Square, over the hills of Bednarski Park, and through the narrow streets. 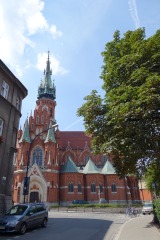 I visited the remaining fragments of ghetto wall. A short section on Lwowska Street includes a plaque on which is written in Hebrew and Polish: “Here they lived, suffered, and died at the hands of Hitler’s torturers; from here they were taken on their last road to the death camps.” A larger section separates a school yard from the park; I came upon a group of Israeli teenagers whose armed guards asked me what I was doing there. I came to see the wall, I replied. I watched for a bit as their animated tour guide seemed to be reenacting the experiences of ghetto captives.

I waited for trams at Ghetto Heroes Square, sitting on the chairs that are part of the memorial to those who waited at this very spot to be transported on that final road to their deaths. 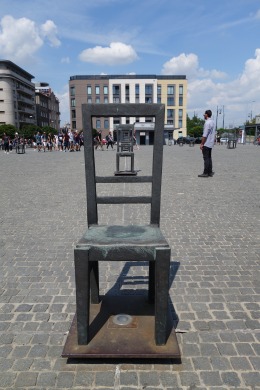 Could I be witness to this on a daily basis? Maybe if I lived in Podgórze, but outside the borders of the ghetto? But that seems no better—to put myself in the position of those who watched from outside the walls.

So my love of this space—a quiet corner just a short walk from the heart of the city—battles with the discomfort of flashes of a painful history.

Could I live there? Could you?

When Krysia and I visited Poland a few years ago, we walked to her friend Wanda’s apartment in Podgórze, a district across the Vistula River from Krakow’s Old City. Historically, Podgórze was an industrial part of town, and also the site of the Jewish Ghetto during World War II. Until recently, this was not a particularly desirable place to live. I went there for the first time in 1986 when my Polish teacher invited me for dinner. She lived with her doctor husband and baby daughter on Limanowski Street in a ground floor apartment that was a converted storefront. The building was grey and crumbling, and the tram rumbled by loudly and frequently. They couldn’t wait to move somewhere better. In 1992, I met a high school student whose classmates joked he was “from the country” because he lived in Podgórze. Even though you could see Wawel Castle on the opposite shore of the river, Podgórze was considered a remote corner of the city.

I really discovered Podgórze in 2005 when I was back in Kraków for 5 months during my first sabbatical leave. I made a point of exploring all the city’s parks and playgrounds as a way of entertaining my two-year-old son; long afternoon walks were often the only way I could get him to nap. Podgórze charmed me. The buildings along the tramline on Limanowski Street were still grey and crumbling, but there was also a lovely triangular plaza and a beautiful church with a hillside rising up behind it. Maybe that’s the source of the name—Podgórze means “below the hill.” Climbing up the curving street from the plaza, large houses with fenced gardens replaced the apartment buildings, and then a massive park appeared on the right. And yet, despite these explorations, I still didn’t know that I had been moving in and out of the borders of the former ghetto, where the Nazis had forced Jews to live (and die).

Plaza and church in Podgórze

Heading up the hill

One of the large houses on the way to the park

Wanda, a long-time resident of Podgórze, pointed out traces of that difficult era as we walked to her apartment. It was the first time I actually connected the contemporary streets of Podgórze with the places associated with the Holocaust. Just over the bridge, we entered Ghetto Heroes Square (Plac Bohaterów Getta), the site where Jews were assembled before being transported to work, the ghetto, or the camps. It wasn’t until December 2005 that a monument commemorating these historical events was installed. The monument is comprised of 33 large chairs arranged in rows throughout the plaza and 37 smaller chairs scattered around the edges of the square and at the nearby tram stop. These serve as a symbol of the people whose material possessions were taken from them as they were selected for the ghetto and elsewhere. The idea was “to tell the story of the place through the configuration of the urban space itself, so that the memory of the absent ones would be manifested through the presence of everyday objects which compose the urban furniture” (Bordas 2006). The chairs make an impression, especially the big ones. They look like they should be functional but they’re not–another way they symbolize the way ordinary life became abnormal.

Wanda led us to a nearby street where a fragment of the ghetto wall still stands. Its characteristic scalloped top makes it resemble side-by-side tombstones. Flowers rested at the foot of a historical marker, an offering made during a commemorative event in March. Wanda also pointed out where a gate of the ghetto used to cross the street near her apartment. For 23 years, Wanda lived on that street. But then the prewar owners—Jews—regained ownership of the property and doubled the rent. Faced with the option of paying 2000 zloties per month or move, Wanda decided it would be better to invest that kind of money in a place she could own herself. That way, she doesn’t have to worry about being displaced again.

Like many Poles, Wanda feels personally affronted by former owners reasserting their claim over property. These feelings are complicated.

It seems only right that descendants of victims of the Holocaust be compensated. Regaining ownership of a building can only to the slightest degree address what those families lost.

And yet, losing their home to the prewar owner seems particularly unfair to the generation that endured years of communism, and never was able to accumulate much wealth in their own lives. Since the end of communism, prices have risen, unemployment has become common, and wages remain modest. Often it’s the poorest residents who live in former homes of Jews because the government took over their management and made them into low-cost housing for those in greatest need. This affordable housing was a small oasis of security in unsettled times. Many such residents today are elderly; others are unemployed; some have problems with their health or with substance abuse. They don’t have many options.

Wanda was one of the lucky ones with the wherewithal and the financial means to buy her own place. But still she carries the resentment with her that she sometimes translates into resentment of Jews more generally. Who was looking out for her rights when the apartment was returned to the prewar owners? What did some rich foreigner need with her building? Why should they get even wealthier at her expense?

In fact, prewar owners are reclaiming properties all over Poland, and even though they are not all Jewish, the greatest resentment is directed toward those who are. 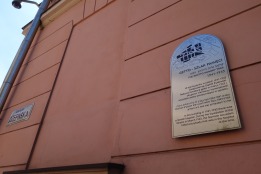 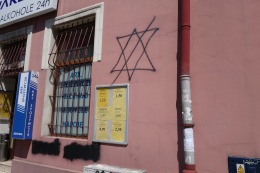 Star of David crossed out–on a storefront in Podgórze

In Podgórze, you can see both the effort to acknowledge sites of Jewish heritage, and also signs of continued antisemitism.

Wanda loves her neighborhood and doesn’t want to live anywhere else (even though she has to spend part of each year in the US to earn enough money to pay her mortgage). The apartment she lives in now is new construction on top of a historic townhouse; an additional floor was added to an existing building. As we climbed the three flights of stairs, she explained that when she bought the place, all that was there were the bare walls. This is standard practice in Poland. The buyer has to select, purchase, and install all the flooring, fixtures, wall coverings cabinets, and appliances. The apartment is long and narrow, with a wall of windows and a sleeping loft. Wanda said she bought it at the peak of the market; today she could find something for half that price. But that would mean moving again.

As we ate a generous spread of Polish dishes, including stuffed cabbage (gołąbki) and two kinds of pickles, Wanda said that Podgórze has become one of the most popular neighborhoods in Krakow. The new heritage sites and museums—including the Ghetto Heroes Square, the Schindler Factory Museum, and the Museum of Modern Art—have brought with them tourists and the amenities that tourists expect. People are moving out of the center of the city because it has become too crowded, cars are restricted on most streets, there are few stores with everyday necessities, and the prices are too high. Podgórze is desirable because it has good public transportation, is within walking distance of the city center, and because of the park, the trees, and the hill that I find so appealing. 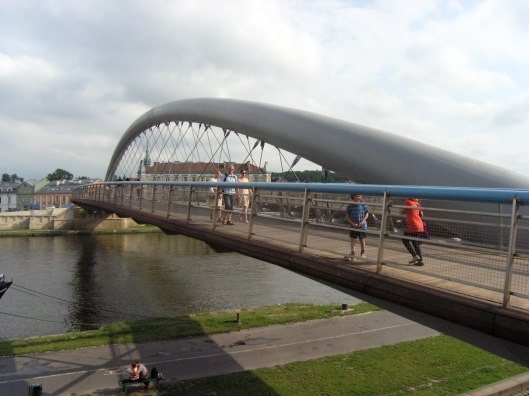 The new pedestrian bridge across the Vistula River to Podgórze.