As I look forward to the Passover celebration at the Gmina Żydowska (Jewish Community) in Poznań, I’m remembering Purim which occurred last month. Purim is a fun holiday; people dress up, give gifts, and tell the story of Esther who outsmarts the evil Haman and saves the Jews. The celebration also involves feasting and drinking. 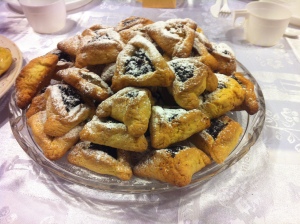 The evening started with a brief introduction to the holiday, conducted in the form of questions and answers. Purim is celebrated on 14 Adat (on the Hebrew calendar) in most places, on 15 Adat in walled cities. I learned that Purim is particularly associated with Jerusalem, which is why holiday preparations were already in full swing when I was there in February. The candy stores, basket sellers, and costume shops in the Mahane Jehuda Market were busy with customers.

Four things should be done on Purim; the story of Esther is told, donations are given to the poor, presents are given to family and friends, and you are supposed to have fun. Everyone was given a gift box that included a booklet in Hebrew, a noisemaker, toys, and snacks. Copies of the story of Esther were passed out, and participants took turns reading it out loud. Any time the name “Haman” was mentioned everyone stamped their feet and sounded their noisemakers. Haman was advisor to the Persian King Ahasuerus who conspired to kill the Jews, but he was outsmarted by Mordecai and Esther, Queen of the Persians. Celebration and feasting are supposed to commemorate these events. 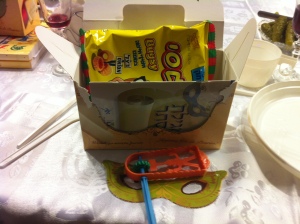 Everyone received a gift box

Guests filled two long tables; some wore funny hats. There were visitors from Israel, Germany, and the US, and I sat beside Jose Maria Florencio, conductor for the Pomeranian Philharmonic in Bydgoszcz. A native of Brazil, he came to Poland 30 years ago to get a masters degree and never left. After discovering his crypto-Jewish heritage, he converted and is now a practicing Jew. 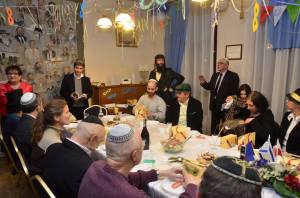