Nestled at the Ukrainian border in the Bieszczady Mountains of southeast Poland, Lutowiska integrates the remnants of the village’s multiethnic past in a walking trail called the Ecomuseum of Three Cultures (here’s a brochure and map ekomuzeum_trzy_kultury-2).

When I moved to Bieszczady in 1992 to do my dissertation fieldwork, some residents of the region had only just started to exercise new postcommunist freedoms by talking openly about their Ukrainian heritage. For the first time, they felt free to speak Ukrainian in public. But neither then nor now, has anyone ever spoken to me in a similar way about their Jewish heritage. Either no one is left, or no one wants to admit it. In Bieszczady, silence persists with regard to the topic of Jews. This is all the more startling when you realize that the prewar towns—Lesko, Lutowiska, Ustrzyki Dolne, Baligród—were all sztetls. Jews outnumbered Christians. According to a guidebook from 1914 (M. Orłowicz Ilustrowany Przewodnik po Galicyi, republished in 1998), Lutowiska had 1700 Jews, 180 Poles, and 720 Rusyns (the name used for the Ukrainian speaking population).

A former Jewish home across the street from the school in Lutowiska. Characteristic for the time, it was made of wood with a stone foundation.

Today, Lutowiska is a large village on the road that runs south from Ustrzyki Dolne into the high mountains of Bieszczady National Park. Immediately after World War II, it fell on the Soviet side of the border, but it was annexed to Poland in 1951 as part of a land swap. Residents were forced to move, as well; those from the chunk of Poland that was ceded to the Soviet Union were moved to the region between Ustrzyki Dolne and Lutowiska that had been depopulated during and after the war. I did my original fieldwork with some of the children of these resettled farmers who never got used to the rocky, hilly soil and colder weather of the higher elevations and longed for the rich, flat farmlands they were forced to leave behind.

So one possible explanation for the silence about the Jewish residents who were brutally murdered during the war is that very few prewar residents, those who would have had personal memories of Jews, remained in Bieszczady. Of course, this isn’t a sufficient explanation. It seems that many forces converged to produce this absence of memory. The state socialist government evoked Marxist internationalism to deemphasize ethnic differences while at the same time trying to solidify Poland’s claim over the land by Polonizing the resident population. Church rhetoric, too, frequently demonized Jews. Certain stereotypes persist in everyday discourse—Poland was weakened by Jewish domination of commerce, and Jews running the contemporary press constantly criticize the Church and the government. Some repeated a phrase they said Jews used to tell Poles, “the streets are yours but the buildings are ours.” But mostly in my experience, not even disparaging stereotypes broke the silence surrounding the topic of Jews; they simply were not talked about.

This backdrop of silence makes it all the more remarkable that, when a group of young Lutowiska residents got together in the early 2000s to explore ways of promoting their village, they decided to view the region’s multiethnic history as an asset rather than a liability. They were not specifically interested in Jewish heritage. Rather, they had a more pragmatic goal: to create attractions that would encourage tourists passing through on their way to the high mountains to stop for a while in Lutowiska. To achieve this, they developed a project called the Ecomuseum of Three Cultures, a 13 kilometer walking trail with information tablets at various sites associated with the village’s cultural and natural history. The three cultures were distinguished most clearly by faith—Roman Catholic (generally understood to be Polish), Uniate (generally understood to be Ukrainian), or Jewish. The trail includes views of the high peaks of the Bieszczady Mountains and the site where the classic Pan Wołodyjowski (1968) was filmed. It winds past the 19th century Catholic church, the former site of the Uniate church, and the ruins of the Jewish synagogue.

One of the main designers of the museum, Agnieszka Magda-Pyzocha, teaches at the local school. She explained to me that nearly everyone forgot that the synagogue ruins still stood right at the heart of the village. For years, the old walls were used by the Polish Army’s Border Patrol as a trash dump. Agnieszka explained:

I remember when I was a child I walked there and saw that some stones stood, trees growing out of them, and nearly nobody knew. By looking in various sources, talking with people, and looking at photographs, we discovered that this was the synagogue that used to be here. Several truckloads of trash were carted away, the whole place was cleaned, and in this way it became an attraction that most residents had known nothing about for all these years. 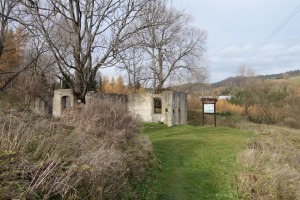 An information board next to the synagogue ruins outlines the history of Jews in Lutowiska. It points out that, contrary to popular belief, most Jews were poor. Most were petty traders and craftspeople, though a few were farmers. The wealthiest Jews in Lutowiska were the Rand family. Mendel Rand started out as a traveling trader of sewing supplies. He worked hard enough to buy a country inn (karczma), and eventually bought the home of the local nobleman. On June 22, 1942, Nazi soldiers instructed Ukrainian peasants to dig trenches near the Catholic Church. That evening Ukrainian police gathered 650 Jews remaining in Lutowiska and neighboring villages Two Nazi officers shot them all, and had them buried in the trenches. A teenage boy escaped and hid in the Jewish cemetery, but he was discovered and brought back. Only seventeen-year old Blima Meyer survived; she was pulled out of the mass grave still alive (A. Potocki, Żydzi na Podkarpaciu 2004). 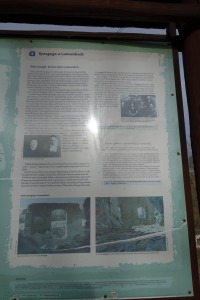 A boy connecting with his Jewish roots.

The Jewish cemetery is on a hill that is visible from the synagogue, but to reach it you have to go down to the school, back around the playing fields, and up a dirt road. It holds as many as 1000 headstones, some dating back to the 18th century. The cemetery was easier to get around in November than it was in August because the grass and weeds had died back. It is on a hill, with a steep slope to one side that is also covered with tombstones. Many stones are decorated with lions or deer (on males’ graves only), birds or candles (females only), crowns or torahs (for men with knowledge of the torah). In places, trees have grown into and around the grave markers. As Agnieszka noted, there is no graffiti or trash in the cemetery. She also told me a group of students from Dartmouth were there for about 3 days this summer. They built steps up to a gate they installed, cleaned some of the stones (they had an expert help them do this), and cut the grass. On the Internet, I saw Dartmouth Rabbi Edward Boraz organizes service trips to a different Jewish cemetery each summer. It’s called Project Preservation.

Tombstones in the Lutowiska Jewish Cemetery

Agnieszka likes to visit the cemetery: “It’s peaceful there, and sometimes it’s so pretty when the sun is setting and the light is falling a certain way. I lie down in the grass between those tombstones, birds sing, I feel peaceful and some sort of connection.”

At first I couldn’t find the plaque marking the site where 650 Jews were murdered by Nazis. Between the Catholic church and cemetery, there was a monument to those killed at Katyn and another for victims of Ukrainian aggression. I asked someone walking by and she explained the place I was looking for was up the road on the other side of the church. Notably, she knew, and was very pleasant about sharing the information with me. 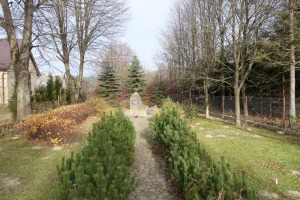 Monument at the mass grave, Lutowiska

And there it was, a short way off the road down a shrub-lined pathway—a simple monument with two plaques. I almost cried when I saw it. The inscriptions read:

It is disturbing to stand on a place where hundreds of people were brutally murdered. 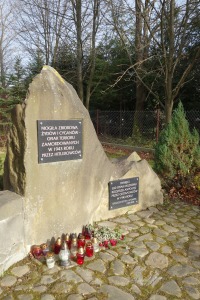 I was deeply moved to see perhaps a dozen candle lanterns and a bouquet of red roses left at the site, probably earlier that week on the occasion of All Saint’s Day. Granted, it’s barely marked from the street. There is just a small sign on a tree saying “National Memorial, Places of Martyrdom.” But it is well maintained. It has not been forgotten as have so many other places I’ve visited associated with Jewish life.

Thanks to the Ecomuseum of Three Cultures, Lutowiska feels like a place that has embraced its history, even the tragic events. They have literally cleaned the trash out of the synagogue ruins and marked the site with a sign that hints at the life Jews had there, and how it ended.