When I met Arline Jacoby in 2016, she was a spry and effervescent nonagenarian with vivid memories of the Pifko-Winawar Family Circle gatherings she attended throughout the early decades of her marriage. She knew that she was related to the Pifkos, but she couldn’t remember exactly how. She thought her husband Harry Jacoby was connected somehow to my great grandmother Hinda Piwko, whose maiden name was Walfisz. She also suggested her ancestors might be part of that family line as well, making her and her husband distant cousins.

No one else seemed to remember the exact family connections, so I just added this to the long list of mysteries to solve one day.

Periodically, I have come across interesting tidbits about Arline. She was featured in the “Sunday Routine” column of The New York Times (“How Arline Jacoby, Artist, Spends Her Sundays,” by Alexis Cheung, July 21, 2017). The article describes Arline’s daily life on Roosevelt Island. In one photo, dressed in a white blouse and loose off-white pants, she holds her cane in front of her as she talks with friends on a bus. In another, she smiles brightly as she reaches for a plant in her garden. And in a third photo, she’s swimming; “I’ll spend about an hour doing laps, and then I’ll go into the steam room,” she explains. In the final photograph, Arline looks up at a sketch in her installation at Octagon Gallery. Still a practicing artist, she says, “My studio is across the street from my house. I paint, I do printmaking, monoprints, paint in oils and watercolor.” Her vibrant spirit shines through the brief vignettes and quotes. 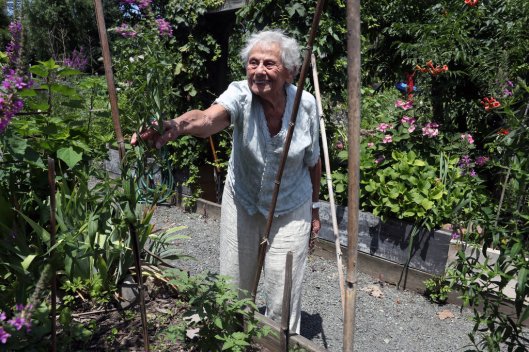 Another article from Tablet Magazine recounts the history of the Borscht Belt resort that the Jacoby family ran for many years. The “colony” was founded in 1941 by Arline’s father-in-law Nathan Jacoby, and later managed by Nathan’s sons Harry and Ben. The Catskills became a summer haven for New York Jews who left the heat of the city and set up house in resorts that organized all kinds of entertainment and outdoor activities. According to the article, some affluent middle-class families preferred the laid-back atmosphere of bungalow colonies like the Jacoby’s over the fancier hotel resorts nearby.

I learned from the article that Nathan Jacoby was born in Łódź, Poland in 1894, and came to America in 1921. He got into the bakery business “through a family connection.” Could that have been my grandmother’s brother Philip Pifko who had bakeries in Brooklyn at that time?

The Tablet article explained, “In the summer, he operated the bungalow colony as a second business, renting the units for the season. Jacoby wanted the colony to be a destination for Jews who had worked their way up into the middle class—light manufacturers and lawyers, many from the Midwood neighborhood in Brooklyn, with good businesses and good cars. The parking lot was filled with Cadillacs and Lincolns. These were families who loved parties and balls, and Jacoby was determined to entertain them, building a stage in his casino building for traveling comics, singers, magicians, and musicians, and for bungalow talent shows, too.” Arline’s daughter Annice said “What my grandfather created was not only a business. He created a sense of place. This was the good life.”

I was reminded of these family-oriented camps when Midge Maisel and her family spent much of Season Two at a similar resort. Arline remembers that comedians like Lenny Bruce performed there, another parallel with The Marvelous Mrs. Maisel, which features Lenny Bruce performing in the Catskills. By the time I was growing up in 1970s, the bungalow colonies declined in popularity. My friends went to sleepover camps for kids only. 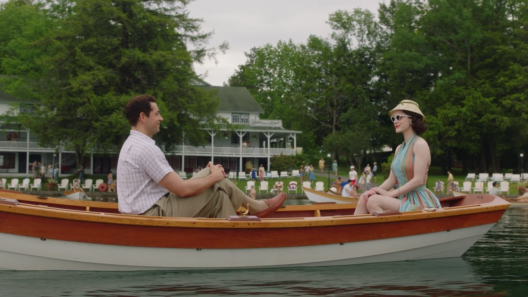 Midge Maisel in the Catskills. Screen shot from The Marvelous Mrs. Maisel.

The breakthrough in my search for a family connection came when I was contacted via Ancestry by Cherie, whose husband is a descendant of Akiva Jakubowicz, the second husband of my great grandmother’s sister Tema. That’s when a light turned on. Could it be that the Jakubowiczes changed their name to Jacoby when they came to the US? Could Arline’s husband Harry have been a grandson of Tema, the sister of my great grandmother Hinda (Walfisz) Piwko?

I already had Akiva (Kiwa) Jakubowicz and his two sons Elias and Nathan in my family tree. Cherie confirmed that her husband descends from Elias, Nathan’s younger brother (Nathan was born in 1896 and Elias was born in 1898), and that they changed their last name to Jacoby after settling in the US. Elias moved from Łódź to Berlin where he married Martha Brusendorf. She was a German protestant, but they raised their children in the Jewish faith. When the war broke out, they lived in hiding in Berlin with their younger daughter, while their older daughter escaped to England on the kindertransport. The family reunited after the war, and immigrated to the US. They were sponsored by Nathan, who had been in New York since 1921.

Armed with this information, I was able to locate documents about Nathan, Arline, and their sons Harry and Ben on Ancestry. Arline Plumer and Nathan Jacoby married in 1947 in Philadelphia, her hometown. I’m not sure, but this might be Arline’s high school yearbook photo from 1943, Girl’s High School, Philadelphia.

Arline Plumer, class of 1943, Girls High School, Philadelphia. Is this my cousin?

If so, Arline’s parents were Isidor/Isadore and Anna/Annie Plumer, and she was the youngest of eight siblings. Her father is listed on his naturalization documents as coming from Barski, Russia, but in the 1920 census, he and Anna’s place of origin is listed as Russia (Pol.)  and their native language is Polish. All of their children were born in the US.

I found Nathan Jakubowicz in the 1925 New York State Census. He worked as a baker and lived with his wife Marie, one-year-old son Harry (listed as Herman), and a cousin Sol Winawer. I believe Sol is the son of my grandmother’s sister Liba, making him and Nathan first cousins once removed. This document also hints at an answer to the question whether Nathan worked in my great uncle’s bakery when he first came to the US. There, in the neighboring apartment, lived my grandmother’s brother Philip Pifko and his wife Goldie. So maybe Nathan is one of the many relatives Philip assisted when they first immigrated, offering them a job in his bakery and helping them find a place to live. 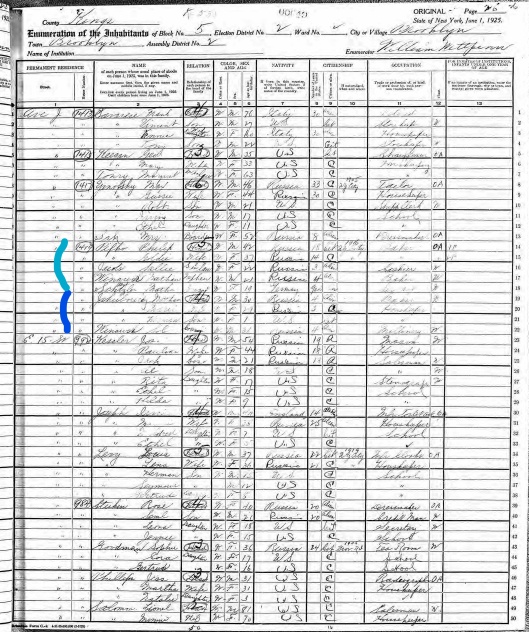 By the the 1930 Federal Census, Nathan had changed his last name to Jacoby. 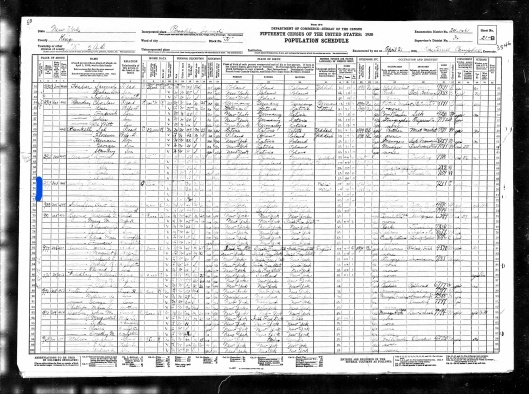 By the 1930 Federal Census, the family name had been changed to Jacoby.

All of this shows pretty convincingly how Arline’s husband Harry was related to the Pifko-Winawers. I’m still looking for comparable evidence that Arline is also a cousin. My guess is she descends from Łaja, the 3rd Walfisz daughter listed in the Żychlin Book of Residents together with my great grandmother Hinda and Harry’s grandmother Tema. I found one hint on Arline’s mother’s death certificate, which lists Anna Plumer’s parents as Morris and Leah Fox, originally from Poland. Elsewhere, I’ve seen Łaja and Leah used interchangeably, so I’ll keep digging.