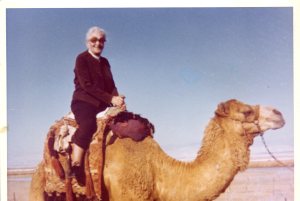 When Nunia was in her mid-80s, she went to Israel. I remember my mom’s wonderment as she described Nunia’s continued vitality. The image that proved it is a photo of Nunia perched upon a camel. The photo is stamped 1973, but cousin Yvonne in Israel remembers showing Nunia around Jerusalem in 1972. Back then, the date in the white edge of photos specified when the prints were made, so maybe Nunia didn’t develop the film right away.

Another camel photo, printed in January 1973. Yvonne says these photos were taken near the Dead Sea.

Nunia made an impression on the Israeli cousins, too. She kept a very busy schedule during her visit. When asked about it, she responded, “I can rest when I die.”

I don’t remember any mention of Israel when anyone talked about the trip. Rather, I remember being told Nunia went to Egypt. I was only nine at the time, so maybe I misremember, but my brother Chris remembers this, too. He says even then it seemed odd to him that she went to Egypt and yet there were no photos of the pyramids. Could this have been another instance of hiding the family Jewish connection? If so, it was a bizarre way to do so. Why not just say she went to “the Holy Land,” a common way Christians refer to Israel? I can’t help questioning my memory here—could I have been told she went to the Holy Land, but Egypt stuck in my nine-year-old head because it is the place I associated with camels and desert (and pyramids, which as Chris said were not in the photo)?

One thing I know for sure. I was never told Nunia went to visit family. I feel a deep sense of loss about this, especially since meeting my Israeli family. I’m also deeply embarrassed.

Could this be the Tel Aviv airport?

1 thought on “Nunia on a camel”