Some of the cousins had a reunion in New York last weekend. My genealogical work (along with that of other cousins and relatives) was instrumental in getting everyone in touch in the first place. All totaled, about seventeen people gathered in Manhattan, including descendants of five of my great-grandparents’ children. Until a couple of years ago, I didn’t know most of them existed. 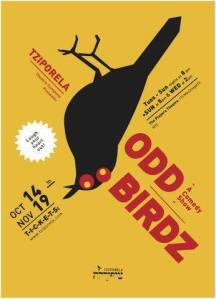 My cousin Pini, grandson of my grandmother’s sister Rachel, organized the gathering. He and his wife Pnina came from Israel because their son Omri was appearing in a comedy show in the Village, Odd Birdz: http://youtu.be/GULKr2ST1BE

Missing this reunion really brings home to me that my family is not in Poland anymore. We were uprooted, and in many ways the connection was severed from this place. We’re some of the lucky ones because we have re-rooted and thrived in the US, Israel, Switzerland, and (I’m told) Argentina. But I have to go to those places if I want to meet my cousins. They are not here.

I have to admit to feeling a bit defeated by this. All I am finding in Poland is fragments of Jewish lives, of my ancestors’ stories. I’m bombarded by experiences of loss, hatred, and evil.

Fortunately, my family has done a lot to help me feel included. My brother Chris skyped me. He held up his phone and scanned the room so I could see everyone sitting in a circle, and hear several conversations going on at once. That’s just like the family gatherings I remember with the aunts and uncles I knew. I got to say “hi” to Pini, Joan (granddaughter of my grandmother’s oldest sister Liba), and Krysia (daughter of my mother’s brother George and the person who embarked on this genealogical adventure together with me three years ago). Since then, I’ve talked with/written with each of them to get their impressions of the meeting. They’ve sent me photos. Another cousin, Eldad, has promised to organize another reunion the next time I’m in New York.

Attachment to place has fascinated me, I think in part because of my mother’s longing for Poland, but also because of my own sense of dis-placement on Long Island where I grew up. Although my home was there, I never really felt “at home.” I moved away as soon as I could, when I went to college, and I never moved back. Each of my brothers returned home at some point (and Chris has even stayed), but I haven’t. I’ve found places that feel more like home elsewhere—in Alabama and in Krakow. But what is lacking in these other places is family.

Growing up, I knew my first cousins, aunts and uncles. We had big family reunions in Connecticut at Auntie Nunia’s (the one sibling of my grandmother I knew) and her daughter Teresa’s. Later, my mom spent more time with her cousins Stanley and Pauline, the children of my grandmother’s sister Sarah, so I got to know them, too. I knew my grandmother had other siblings, but we were never told much about them. I wasn’t told about the family plot in a cemetery just fifteen miles from where I grew up, or that other cousins live throughout the New York metropolitan area. In effect, I was cut off from a significant part of my family, and even more significantly, cut off from their culture, religion, and history.

Learning about my family’s heritage is complicated because I’m delving into things my mother invested a tremendous amount of energy into hiding. I think it took me so long to ask these questions about the past out of loyalty and respect for her. But I don’t believe it helped her to keep things secret. Quite the opposite. By denying or hiding her Jewish heritage, she never could come to terms with the trauma she experienced. And she alienated herself from the support system that might have helped her come to terms with it.

For me, recognizing and embracing all the branches of my family helps to root me, if not in a particular place, at least within a particular history. I’m proud to be part of this large extended family. It feels like a tremendous gift. That we survived, that we thrived. I don’t take for granted how fortunate we are for that. For so many families, there is no one left, just the scattered fragments of lives lost.