I was happy to receive a package from Poland yesterday–a surprise post-holiday gift? In fact, it was a book by Justyna Wojniak titled Szkoła – Polityka – Prawo: George Zygmunt Fijałkowsky-Bereday i Jego Wizja Edukacji (School, Politics, Law: George Z. F. Bereday and His Vision of Education).

The author contacted me a year ago to talk about my mother and her brother for her doctoral dissertation about my uncle George Bereday, who was instrumental in establishing the discipline of Comparative Education. Most of the book focuses on Bereday’s scholarly work on the idea of equal education for all, methods for comparing educational systems in different countries, as well as his concerns about equal rights and social justice generally. I will read the whole book eventually, but the first chapter is most relevant to my search for family heritage. Wojniak cites this blog in the chapter about my uncle’s childhood and early life in Poland, and even discusses my mom’s service in the Polish Underground Army during World War II. It’s great to see my work being put to use, and translated into Polish for Polish speakers to read.

I was also amazed to find a photo on page 28 of my babcia with a young George/Jurek on one side and a young Maria/my Mama on the other. They are all smiling, and Babcia holds both children by the hand. It’s winter–they are wrapped up in warm coats, hats, gloves, and boots, walking along a gravel road with barren trees in the background. I would guess my mom is about six years old and Uncle George about eight, which would make it around 1928 or 1929. Based on the time and rural setting, my guess is it was taken at Dębinki, the estate outside of Warsaw where they lived from about 1928-1934. Mama always said those were the happiest years of her life. 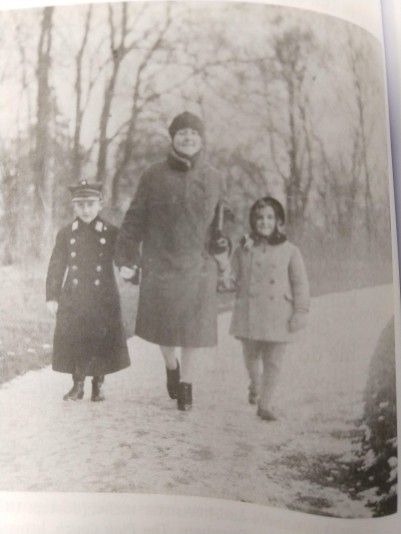 I have never seen this photo before. In fact, I don’t recall ever seeing a photo of my mother as a child. And even more surprisingly, the source of the photo is my own cousin Krysia! We’ve been in touch, and I’m counting on her to send me a better copy than this one.