When my cousin Krysia and I first started searching for our Jewish roots, we barely knew where to start. Our Aunt Pat, a genealogist, had shared an impressive record of names, places, and even stories. Obsessive Internet searches yielded limited results–things like a notice in the Canadian Jewish Review from October 1963 that listed my grandmother’s sister Maria Weglinska among the out-of-town guests at Rochelle Pifko’s bat mitzvah in Toronto. Pifko/Piwko was my grandmother and her sister’s maiden name. But how were they related to these Canadian Pifkos? 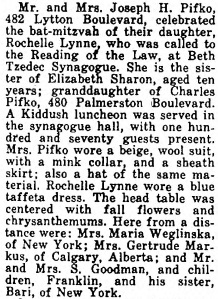 Notice in the Canadian Jewish Review on October 18, 1963 about Rochelle Pifko’s bat mitzvah.

How could we push beyond these tidbits? What more could we learn about our family?

Thanks to the Jewish Historical Institute (JHI, Żydowski Instytut Historyczny) in Warsaw we made some breakthroughs that have helped us piece together our family tree. Krysia’s husband Steve stopped in during a business trip to Warsaw and met Anna Przybyszewska-Drozd at the genealogical division of the JHI. She did a preliminary search on JewishGen, and found references to vital records of some of our ancestors. A few months later, Krysia and I went on our first roots trip to Poland. We still had no idea what we were doing so we stopped in at the JHI, meeting with Anna’s associate Aleksandra (Ola) Dybkowska-Grefkowicz who stayed after hours to help us with our search. She prefaced everything with her usual caution, “Don’t be disappointed if you don’t find anything” because so many records were destroyed and most Holocaust deaths were not recorded. Then, she showed us how to make use of the records in JewishGen and the databases of  the Polish National Archives, and suggested other places we could search for records.

I learned enough at that meeting to make some breakthroughs. I discovered my Zurich cousins through the Family Finder database on JewishGen, and shortly after my Israeli cousins through myHeritage.

On successive trips to Warsaw, Anna and Ola helped me learn more about my grandfather Jakob Rotblit. I was speaking with Ola about his automobile dealership in Gdansk when Anna walked in. A look of recognition flashed across her face; she pulled a book off the shelf about Jewish business owners in Gdansk between the World Wars. Sure enough, Jakob Rotblit was listed with information about his Ford dealership and with details about his wife and his parents. Another time, I mentioned that my mother and grandmother are on the list of Jewish survivors who registered after World War II ended. With a satisfied smile, Ola told me that the original registration cards are in the JHI archive. I walked upstairs to the archive and was able to hold those cards in my hand. The archivist showed me how the earliest records, from 1945, were handwritten on the backs of cut up prewar accounting records. Paper was scarce, so they used what they could find. By 1946, information was filled in on larger, pre-printed cards made especially for this purpose.

Once again, just a few months ago, the genealogical division helped me with my search. Anna e-mailed me that a woman, Ellen, had contacted her to find out about her Piwko ancestors. Anna thought we were related and asked if she could share my contact information with her. Of course I agreed, and since then Ellen and I have been in ongoing communication. She is an avid genealogist who turns out to be my 3rd cousin. Her great grandfather was my great grandfather Hiel Majer Piwko’s younger brother Urish. I knew nothing about him, maybe in part because he moved to Canada in the 1880s.

Ellen and I had the extraordinary good fortune to be in Poland at the same time this June. She was on a once in a lifetime Jewish history tour of Eastern Europe with Professor Stephen Berk. Although I didn’t know anything about her or her great grandfather, I had an inkling about her branch of the family from that notice I found years ago about my Auntie Nunia’s (Maria Weglinska) visit to Toronto in 1963. Rochelle Pifko, the girl whose bat mitzvah she attended, was Ellen’s cousin and another descendent of Urish. So another mystery is solved. Some contact was maintained between my great aunt and her uncle who migrated to Canada shortly after she was born. And when Nunia/Maria came to the US in the 1950s, she renewed that connection and even visited. Ellen remembers when Nunia came to Canada some years later for another family event.

2 thoughts on “Finding Family at the Jewish Historical Institute”