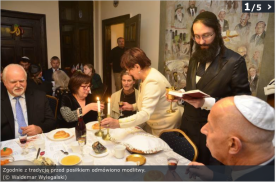 Not long ago, a reporter revealed that that the man acting as Poznan’s rabbi was not in fact a rabbi. He called himself Jacoob Ben Nistell and claimed to be an Israeli from Haifa, but it turns out he is actually Jacek Niszczota, a Catholic Pole from Ciechanów, a town 60 miles north of Warsaw.

I’m not quite sure what to think of the story, but it resonates with Ruth Ellen Gruber’s characterization of much of Jewish activity in contemporary Europe as “virtual.” In her book Virtually Jewish: Reinventing Jewish Culture in Europe (2002), Gruber describes the myriad ways Jewish spaces, performances, and even people are in fact idealizations, representations, or stylizations of Jewishness. They are done up in “Jewish style” but often without actual Jews. This has occurred throughout Europe, where the interest in all things Jewish far exceeds the capacity of the tiny or absent populations of Jews to fulfill. Instead, non-Jews renovate synagogues, restore cemeteries, run Jewish restaurants, perform Klezmer music, and lead Jewish heritage tours.

Jacoob/Jacek’s self-presentation as Hasidic rabbi can be added to this long list of virtual Jewish performances, with the important qualification that his role was deceptive. He claimed to be a real Hasidic Jew, not someone just dressed up as one. He wore his hair long, with the distinctive side curls. He also dressed in a black brimmed hat and long black jacket. I don’t believe his intentions were malicious. Nor am I sure how much he deliberately deceived people, and how much people saw him as they wanted him to be. When I met him, he didn’t tell me “I’m a rabbi.” Rather, he said “They call me a rabbi,” his sweet smile and amused tone suggesting he was willing to go along with what others were saying about him. He did, however, claim to be from Israel. I didn’t quite believe him; more accurately, I questioned whether I heard him correctly because it didn’t fit my reading of him. He seemed Polish to me. Others tell me he put on an Israeli accent, but I can’t always recognize accents of Polish speakers. When I talked with him about a possible interview, he did not refuse, but he did not seem very eager either so I never pursued it. He seemed quirky and harmless, a bit of a happy jester.

Nevertheless, Jacoob/Jacek was deceptive and his actions are highly offensive. I saw him at a number of commemorative events: praying at the grave of Akiva Eger, a respected early 19th century Poznan rabbi; saying kaddish at the unveiling of the commemorative monument and lapidarium in Wronki; leading prayers at the Jewish Religious Community in Poznan. What got him caught was the media attention he received when he appeared at an ecumenical meeting with a Catholic priest and a Muslim imam. Someone from his hometown recognized him and alerted the media.

At that point, it became clear that there had been rumblings among Israelis and other Hebrew speakers that Jacoob/Jacek didn’t actually know Hebrew. Rather he read texts phonetically, putting emphasis and accents in the wrong places.

So that leaves me with the question why no one at the Jewish Religious Community (which is an official religious association for practicing Jews) challenged the veracity of his claims. Either they were genuinely deceived or they chose not to do anything about it. It’s problematic either way. If they didn’t know, it reveals how tenuous their knowledge of Jewish religious practice, culture, and language is. If they did know, it suggests they allowed the deception to go on. Even though Jacoob/Jacek was never declared a rabbi officially, I did hear him referred to affectionately as “our rabbi” (“nasz rabin”) and he was allowed to lead prayers in contexts that everyone expected would be done by a real rabbi. The Jewish Religious Community has a legal status. It is supposed to be the official institution for practicing Jews. What it turned out to be instead in this case is part of the virtual Jewish space. The idea, look, and performance of Jewishness was deemed sufficient.

I feel sympathy for Jacoob/Jacek, who has disappeared since his deception was revealed. I wonder what compelled him to pretend he was Jewish, and why he adopted the stereotypical form of a Hasidic Jew. It’s anachronistic in so many ways. Being any kind of Jew is a rarity in Poland, and the only Hasidic Jews in Poznan are occasional foreign visitors. Even historically, when Jews lived in Poznan in greater numbers, very few were Hasidic. This was even pointed out to me by a prominent member of the Jewish Religious Community. He gestured toward Jacoob/Jacek and assured me that even in the past, Poznan Jews tended to be more modernized.

“Who, 30 years ago in this country, would have pretended to be a rabbi, to say nothing of 70 years ago?”asked the Chief Rabbi of Poland Michael Schudrich in an article in the Times of Israel. He described Jacoob/Jacek as “very sweet and smiley,” much the same as I saw him.

3 thoughts on “The Curious Tale of the Fake Rabbi”