The Southern Conference on Slavic Studies has its annual meeting right here in Tuscaloosa starting today until March 19. Tomorrow, I will present a paper about my heritage work in Poland. Here is the abstract:

From Curbstones to Commemoration: Reincorporating the Memory of Jewish Life in a Polish Town

The figure of the Jew remains a multivalent symbol in Poland, resilient even in the face of the destruction of Jewish culture during the Holocaust and erasure of its traces during state socialism. My research on Jewish heritage asks what can be done with the fragments of Jewish culture that remain in Poland, sometimes hidden and sometimes in plain sight. And what value does such memory work have? The growth of interest in Jewish culture in Poland can be seen not just in major cities, but also in smaller communities throughout the country. I focus on one commemorative project in one Polish town to illustrate changing, though still contested, orientations toward the history of Jewish residence in Poland. Specifically, I examine the rescue of fragments of Jewish tombstones from a street curb where they rested for sixty years, and the decade-long effort of multiple stakeholders to return the stones to a place of commemoration. I argue that an essential component of the project was to reincorporate the history of Jews into the wider history of the town—a kind of making what was regarded as “other” (“obcy”) into something that is one’s own (swój). The Lapidarium of tombstones from the old Jewish cemetery in Wronki has literally become a place on the map, and has returned the memory of Jewish lives to town residents and visitors. The fragments of tombstones, historical sign, and commemorative marker reveal something about the past, even if it is just in an incomplete and shattered form. And they point toward the future—the possibilities that might emerge out of reassembling Jewish life in Poland.

In memory of the Jewish community that inhabited Wronki from 1507-1939. Lapidarium of tombstones from the destroyed Jewish cemeteries of Wronki 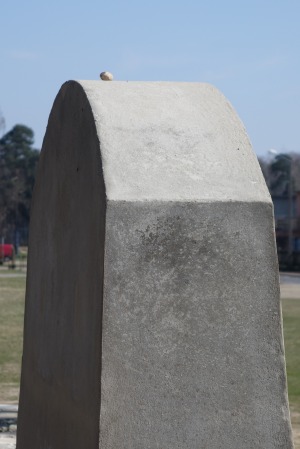 Stone offering on the monument at the lapidarium in Wronki

This is my first effort to make sense of one of the most inspiring heritage projects I witnessed while in Poland last year–the lapidarium of Jewish tombstones in Wronki. I describe the project as a collective representation–symbolic of an inclusive concept of Wronki history (and by extension Polish history). Jewish residents, although they are no longer present, nevertheless comprise an essential element of that history. As such, this new resting place for Jewish tombstones represents the return of the memory of Jews back into the center of town and the center of residents’ consciousness.

But more tomorrow–my panel is from 10:15-12 PM at the Embassy Suites in downtown Tuscaloosa.