During my photography expeditions in 1992, Krakow’s Kazimierz district caught my eye. Kazimierz has long been associated with Krakow’s Jewish population. It became a separate city for Jews when new regulations restricted their access to Krakow’s center during the 15th century. Before World War II, Kazimierz was incorporated into Krakow, but still most residents were Jewish. After the war, a tiny Jewish community congregated in a few remaining Jewish organizations. Despite their small numbers, the district continued to be associated with Jewish culture.

A menorah motif on the fence around the green space on Szeroka Street, 1992

Over the past 25 years, Jewish life has returned to Kazimierz. It’s an eclectic community of people who define their links to Judaism and Jewish culture in a wide range of ways, including Poles who have recently rediscovered or reconnected with their Jewish heritage, Jews from the US or Israel or elsewhere, and people who simply appreciate Jewish culture. This is not a return to the prewar Jewish community; it is its own unique hybrid. Erica Lehrer describes the disparate strands that are woven together in Kazimierz in her book Jewish Poland Revisited: Heritage Tourism in Unquiet Places. It’s well worth reading for anyone interested in understanding something about what’s happening in Kazimierz today.

But back in 1992, the main site of active Jewish culture in Poland was the Remuh synagogue and adjoining cemetery.

Inside the Remuh synagogue courtyard, 1992 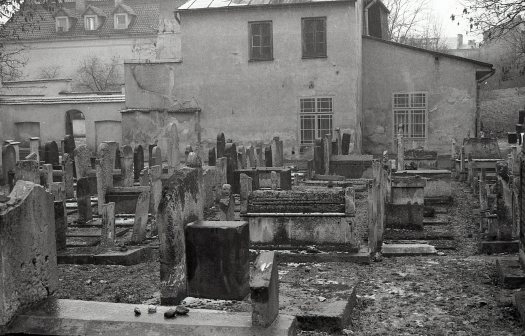 Remuh cemetery, the synagogue in the background, 1992

These are some of the older graves in Kazimierz, with the distinctive vaulted grave covers.

Part of the cemetery is surrounded by a wall made of fragments of tombstones. During World War II, many of these stones had been repurposed around the city as sidewalks and roadbeds, but they were recovered and placed in this wall. 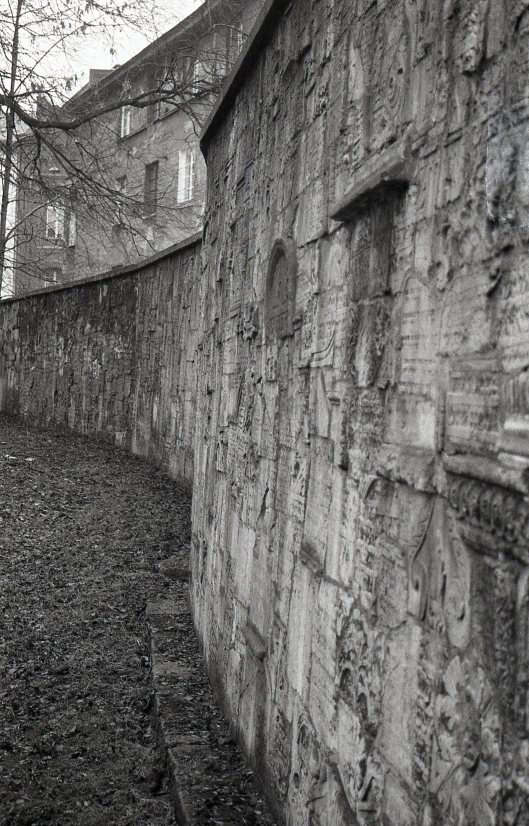 Wall around the Remuh cemetery, composed of fragments of tombstones recovered from building projects after World War II.

I also visited the larger Jewish cemetery off of Miodowa Street. Here are newer graves, dating from the 19th-20th centuries, including some postwar burials. The opulence of some of the tombstones attests to the prominence of the people buried here.

But much of the cemetery was in disrepair. The tree above that is engulfing a tombstone attests to the length of time this neglect had lasted.

A final place that caught my eye, pointed out to me by a friend, Krystyna, was some graffiti inside the courtyard of a broken-down (though still occupied) building in Kazimierz. Someone painted a Madonna, but where her face should have been was a tiny door. I don’t remember what was behind the door, but it looks like there might have been 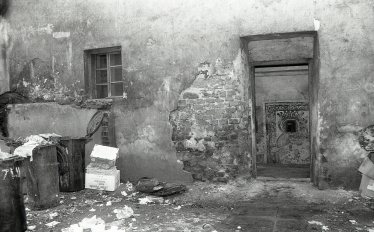 Madonna painted in a recess of a courtyard full of trash and broken down walls, Kazimierz 1992

electrical circuits or perhaps water pipes. I remember Krystyna being captivated by this image. An artist herself, she wondered about its larger meaning: who would have drawn it, and why they would have put it where a door replaced the face? And why place it in a trashy courtyard in Kazimierz? I can’t remember if she said anything explicitly about the placement of Catholic imagery in the former Jewish district, but I think she did. And I certainly ponder this. It wasn’t a reclaiming of territory for Catholics–if it had been it would not have been placed where it was without a painted face. It was meant to be ironic, I believe. The Madonna of Trash and Disintegration.