My cousin Pini (Pinchas) Doron, reminded me that his grandfather and namesake died in the Warsaw Ghetto. This is the story he sent me this morning:

“The Okopowe Cemetery is the old big cemetery in Warsaw that we visited with the whole family in 1995, including Pnina’s (his wife) parents.

“Her mother used to run from the Ghetto through the cemetery to the fields to bring potatoes to her family when she was 13 years old.

“I have seen in your post the stone sign for the people who died in the Ghetto. As I told you, my grandfather Pinchas Kolski died in the Warsaw Ghetto in 1940 and was buried in a temporary cemetery inside the ghetto. As we know, in 1940 they no longer allowed anyone to bury the dead  in the Okopowa Cemetery outside the Ghetto. 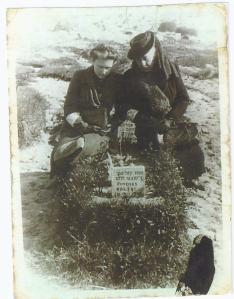 Mirka and Rachel Kolski at Pinchas Kolski’s grave in the Warsaw Ghetto. He died in 1940.

“We have this picture of Grandmother Rachel Kolski and her daughter Mirka (see the white sleeve with the [Star of David]-I think this was before they introduced the yellow star)?

“Mirka told me that after this visit to the grave, they managed to escape the Ghetto and to meet your step grandfather (that would have been Zygmunt Bereda) who hid them.”

2 thoughts on “Cousins in the Warsaw Ghetto”