Going through boxes of hastily collected papers from Mom’s house I find so many unwritten cards. Sympathy cards: “Thinking of You. I know you’ll make it through this.” A Thomas the Tank Engine birthday card: “Peep-peep grandson!” I like to think that one was meant for Ian… There are also postcards: Salvadore Dali’s “Portrait of Gala;” two views of the Biltmore House; a café scene in New Orleans; the Isabella Stewart Gardner Museum in Boston. I find random addresses of people I don’t know, torn off envelopes, Three envelopes with “Maria” written on them in my dad’s hand—but they’re empty; his cards are missing. How do I dispose of this stuff? But why would I keep it?

I hold on to the memories they evoke. The bits of my mom’s story they signal. Mama liked to send cards. She always took the trouble to include a personal note.

I seem to recall she and my dad went to the Biltmore Estate on their way to Texas once. This might have been in December 1991 since I also found an unfinished Christmas card to my friends Kara and Bob and their daughters Paula and Maria (yes, she was named after my mother) with the heading “Austin, Texas December 16, 1991.” Mom wrote:

We arrived by car yesterday at 5 PM. It was an exhausting trip but we are happy to visit with our son Chris. We stopped in Virginia and drove through the Skyline Drive with the Blue Ridge Mountains all around us. A heavy rain stopped and there was no one on the road.

“Return to sender, Addressee deceased” is stamped on the envelope of a letter to Dr. Gustave Aufricht, M.D.,. This was probably Mama’s plastic surgeon. Inside is a Christmas card “May the spirit of Christmas abide with you throughout the new year” and in her hand the note “Sincerest wishes from your devoted patient.” On the website of the American Society of Plastic Surgeons, Dr. Aufricht is described as a founder of the society:

The two doctors were as unalike as any two men could be, except for their dedication to their craft. Despite his French-sounding name, Dr. Maliniac was born in 1889 in Warsaw, Poland. After studying with the leading plastic surgeons on the continent before the war, he was called into the Russian Army at the outbreak of hostilities. A small, intense man, Dr. Maliniac, who was Jewish, came to the United States in 1923 and decided to stay as anti-Semitism was on the rise in Europe in the 1920s. Settling in New York City in 1925, he opened a thriving private practice, and convinced the administrators of the City Hospital system to establish the first division of plastic surgery at a public hospital.

Dr. Aufricht, born in 1894, was a native of Budapest, Hungary. Like Dr. Maliniac, he treated wounded soldiers during the war, studied with the leading practitioners in Europe and arrived in New York in 1923. And like Dr. Maliniac, he was Jewish and decided to stay here when things became inhospitable in the Old World. However, the similarities ended there.

Where Dr. Maliniac was considered bombastic and dictatorial with his students and residents, Dr. Aufricht, who went by the nickname “Gusti,” was genial and outgoing, but no less a commanding figure, loved and revered by his charges.

Interesting that Mama sent her Jewish doctor a Christmas card. Did she know his religion? The card was postmarked December 1980. If she was his patient around 1950, she probably sent cards to him for 30 years.

Another card was written by my friend Kimmy, thanking Mama after a visit in 1981. Kim also asks for my address at school so it must have been sent in the fall, soon after I started college. Jumping forward again, I find a postcard from me, written from Poland. This one was also written around Christmastime so it must have been 1991: 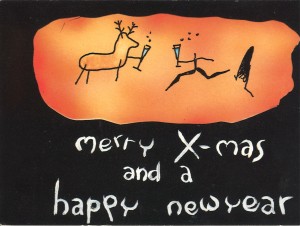 A postcard I sent from Poland, probably in 1991.

Dear Chris, Mom, & Pop, The Happiest of holidays to you all. I hope you find some snow somewhere. Sorry I can’t be with you but know I’m thinking about you. Can you believe I found this card in Poland? Love, Marysia 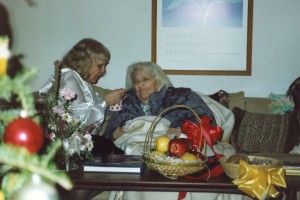 In the living room on Long Island, probably Christmastime 1991

And then this photo of Mama and Babcia on the couch in the living room at home. The tree and ornament in the left foreground signal it was around Christmas, also. Mama is in silhouette, eyes downcast. She appears to be spooning something out of a mug to give to Babcia, who is leaning toward her with closed eyes. Or maybe the camera just caught her blinking? She is bundled up in a down jacket and a blanket, like a child. When was this? Near the very end of Babcia’s life. Could it also be 1991? Maybe Mom and Dad returned from Texas before the holiday? It’s so rare that I have seen photos of my Mama and Babcia together. There seems to be so much tenderness in my mother’s attention, as if in this moment of caring all the tension between them dissolved.