The Marsz Niepodlegołości, March of Freedom, has gotten a lot of attention from the international press, no doubt because of parallels with rising nationalism in other parts of the world. The march, organized by radical nationalist parties, was on November 11, Polish Independence Day. Started in 2010, it has attracted more attendees than the official Independence Day celebrations almost since it began.

2017 March of Freedom under the shadow of the Palace of Culture. Photo credit: Radek Pietruszka/European Pressphoto Agency

Here are links to a few articles. Unfortunately, some of them are behind pay walls.

The next day, “Polish Leaders Condemn Nationalist March” was published.

From BuzzFeed: “March Led By White Nationalist Group In Poland Draws Tens Of Thousands From Across Europe“

And in Haaretz: “Tens of Thousands Join Far-right Nationalist March for Polish Independence”

My post about the march: Independence Day: The Emotional Tenor of Populism in Poland

I’ll give a paper about it at the American Anthropological Association Meeting on November 30.

As November 11, Polish Independence Day, approaches, I am preparing a paper about the official and unofficial marches in Warsaw that took place in 2014. I’ll present it at the American Anthropological Association Meeting in Washington DC on a panel entitled “Cycles of Hatred and Rage: What Right Wing Extremists in Europe and Their Parties Tell Us About the U.S.” on Thursday, November 30.

The unofficial March of Freedom 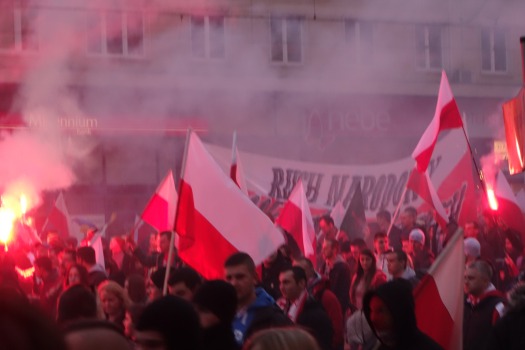 The panel will examine the dissatisfaction with the status quo that seems to have overtaken people in Europe, the US, and beyond, and the associated movements pushing for change. Anthropological studies of resistance and revolution tend to view popular dissent as a positive expression of agency by people who are underrepresented or oppressed by powerful political and economic interests. However, many of these contemporary movements are closely allied with xenophobia, making it harder to celebrate the changes they wish for.

Anthropologists usually work very closely with people, on the ground and in their everyday lives, giving voice to their thoughts, beliefs, values, aspirations and frustrations. They try to explain why they feel what they feel, and why they do what they do, so that their perspective is comprehensible for others who don’t necessarily share those beliefs, values, and experiences. Hopefully, what comes out of the effort is a broader understanding of the varied expressions of culture throughout the globe. I also think that anthropologists have tended to argue that such understanding can be grounds for greater tolerance, and even help to alleviate suffering. However, these assumptions are difficult to reconcile with the the recent rise of nationalism, nativism, and rejection of anyone and anything perceived as different.

I’ve been struggling with this myself since the last presidential election. It’s made me realize how much much my own world view is based on a belief in human progress, despite the fact that I have been critical of the so-called “metanarrative of progress” that assumes that modernization, industrialization, and for that matter globalization, lead inevitably to better lives. Other notions of progress have had a fundamental impact on my perceptions. For example, I thought I was witnessing the growth of tolerance, and the possibility of people working together toward common goals regardless of ethnic, religious, gender, cultural, and even political differences. This was part of the promise of globalization–a world more deeply interconnected, and thus interdependent. The global spread of democracy was supposed to limit warfare and global networks were supposed to contribute to economic prosperity.

Anthropologists have pointed out for decades that the benefits of globalization are unequally distributed. Some people feel left out; for them, the prosperity of others just deepens their sense of stagnation and frustration. And this brings me back to the favorable view anthropologists have tended to have of popular revolts. We’ve written about hegemony, and the failure of the oppressed to question the power structures that prevent them from getting ahead. We’ve celebrated the moments when underprivileged groups have organized and fought for civil rights and greater voice in leadership. Well, people are rising up right now. They are fighting against the structures that they see as limiting their freedom and opportunities. Cultural relativism, one of the foundational principals of anthropology, compels us to withhold judgement and understand the views of others in their own terms.

But as I tell my students when I introduce the concept to them, while it’s important to take a culturally relativistic approach in order to understand others’ beliefs and actions, that doesn’t mean we withhold critical evaluation or moral judgement. Some viewpoints need to be challenged, especially when they are dangerous to whole classes of people, whether it be because of their religion, or ethnicity, or gender.

In my paper about the official and opposition Independence Day celebrations in Poland. I will explore the reasons for the raw anger expressed by marchers in the opposition, showing how they are grounded in a legitimate critique of the failed promises of globalization. But I’ll also challenge the retreat into xenophobic nationalism. There is room in Poland  (and in the US and elsewhere) for different ethnicities and religions. There has to be, because the alternative will be worse. We’ll be back to forced resettlement, battles over territory, maybe even genocide.

See, I still hold out hope for progress–social progress where people rely on deliberation and negotiation to work out disagreements. They don’t immediately throw bottles and call each other names. 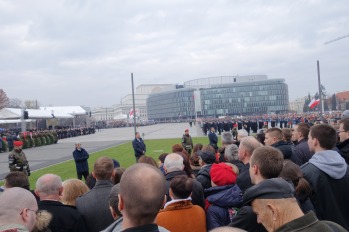 Soldiers from the four branches of the military line up for the parade.

“I’m with Bronek,” one of the few political banners in the parade, expressing support for President Bronisław Komorowski.

Here is the panel abstract:

Cycles of Hatred and Rage: What Right Wing Extremists in Europe and Their Parties Tell Us About the U.S

The growing support for extreme right wing movements and authoritarianism in the United States and Europe has caused apprehension among political analysts and scholars. Anthropologists are uniquely positioned to make a difference and have a direct impact on understanding these events that are of such grave importance in the U.S. and abroad. This panel underscores this year’s theme, “Anthropology Matters,” precisely because anthropologists’ commitment to long-term, in-depth research on the ground with participants in these movements and through inquiry into reception to the ideas transmitted during and after election campaigns contributes to a layered understanding of these movements. The support for these movements has occurred even in well-established, formerly stable democracies. These movements are nothing new, and many have origins in the later nineteenth century. Curiously, supporters of these movements often sacrifice their own economic and social best interests in elections in order to achieve ideological goals. Anthropologists have long been interested in this phenomenon, and David Kertzer, in Ritual, Politics and Power (1988) developed salient theoretical explanations for such voters, incorporating, among other sources, his own research in Italy. This panel of anthropologists working in Europe, from Poland to Germany to Italy to France to Great Britain, addresses these concerns, drawing on their own recent fieldwork and historical research.
Attitudes toward the European Union, economic nationalism, immigration and the acceptance of refugees, deindustrialization, and globalization are among the themes discussed in this panel. A number of questions will be addressed: 1) What motivates such support? 2) Is this support something new, or is a cyclical process at work? 3) If cyclical, can existing or new theoretical explanations be derived from the process? 4) Are these movements and their supporters increasingly becoming a threat to democracy? 5) Have effective countermeasures minimized such a threat?
Discussants from Europe and North America will use these findings to analyze the impact of these European movements on current developments in the U.S. and to reflect on the cross-cutting relationships of these developments with these European social and political movements.

And here is my paper abstract:

Independence Day: The Emotional Tenor of Populism in Poland

Just as David Kertzer (1988) points to the emotional and cognitive power of symbols to shape popular support, or opposition, for political authority, Jan Kubik (1994) showed how both the state socialist authorities and the opposition Solidarity Movement made use of national and religious symbols in their competition for popular approval during the waning days of state socialism in Poland. In recent years, with market liberalization and European integration firmly established, the same national symbols are employed once again in both official and opposition rituals. Independence Day events in Warsaw (November 11, 2014) reveal the stark contrast between the official ceremony, characterized by formality and pomp, and the opposition march, full of energy and anger. Notably, both events employed national symbols and claimed to be the legitimate heirs of past struggles for freedom, but the contrasting emotional tenor of each signals fundamentally opposed orientations toward open borders, global markets, and indeed the character of the Polish nation. Considered in the context of nationalist/populist movements elsewhere, it points to a global shift toward fragmentation and isolationism. I argue that the populist reassertion of nationalism in Poland can be viewed as the rejection of neoliberal hegemony. My point is not to support or condone the concurrent rise of xenophobia, but rather to understand how the turn to a protectionist vision of Poland free of external influences emerges from disillusionment with the failed promises of open markets, especially for the working class men who dominate the opposition Independence Day March of Freedom.