Kutno’s native son Sholem Asch is in the news a hundred years after writing a play that deals with issues that remain controversial today. His work also shatters a lot of assumptions about Jewish life in Poland in the early 20th century–Written in Yiddish, it features a brothel, a Torah scroll, and love between two women. Asch’s play God of Vengeance was written in Yiddish in 1907 and first produced in Berlin in 1910. I found an electronic version of the 1918 English translation (you can follow the hotlink above). In the play, Yekel, who lives with his family above the brothel he owns, tries to improve his family’s status by commissioning a Torah scroll and marrying his daughter Rifkele to a Yeshiva student. Instead, the young daughter falls in love with one of the prostitutes and in a pivotal scene, they kiss. The play highlights the tension between piety, reflected in the Holy Scroll that is supposed to bring respectability to the family and the economic and sensual attraction of the brothel downstairs, as well as observations about women’s empowerment and oppression.

The play has been getting attention recently because of Paula Vogel’s Broadway play Indecent, a play about a Yiddish play that was ahead of its time (as the NPR report about Indecent is titled). Vogel’s play centers around the 1923 staging of God of Vengeance in New York’s Apollo Theater (also on Broadway), notable because the whole cast, the producer, and one of the theatre owners were arrested and eventually convicted of indecency. The play had been controversial where it had been staged throughout Europe, but it also received critical acclaim.

The popularity of Indecent has led to renewed interest in Asch and his play, which was recently produced at LaMaMa Experimental Theater in the East Village (In God of Vengeance, a Nice Jewish Family Lives Above a Brothel). 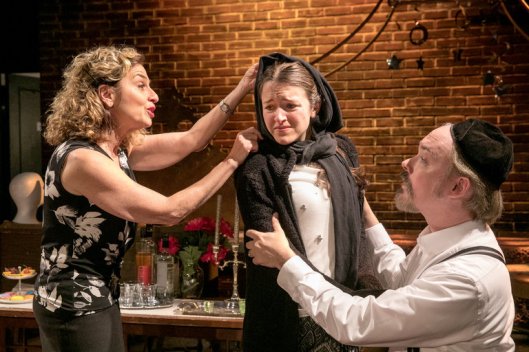