A few readers have helped me translate the Skierniewice map I posted recently. Thank you Pnina, Ellen, Wendy, Marion, Mark, Roberta, and the reader els! It’s taken me a while to figure out Photoshop, but here is the hand-drawn map with English translations: 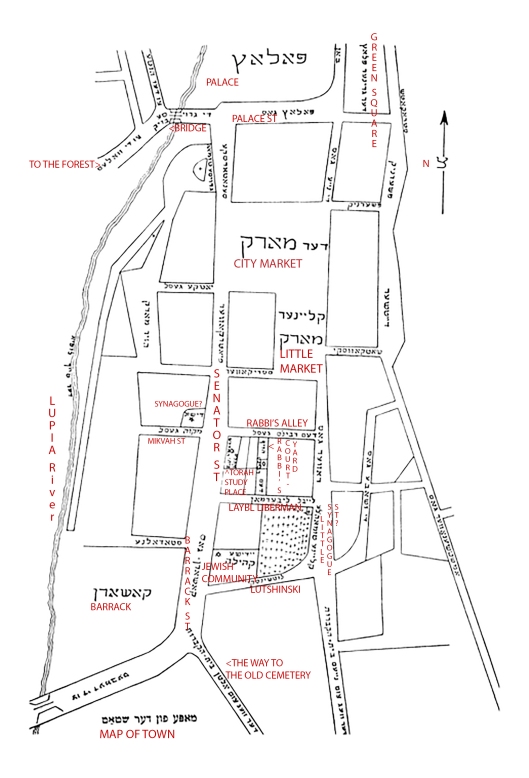 I found the map in the Atlas of Memory Maps virtual exhibit, but a reader located a better resolution digital copy in its original source, the Skierniewice Memorial Book by Sefer Skernievitz, available in the New York Public Library Digital Collections. (Thanks els who shared this link with me).

Even with all the help I received, figuring this map out has been tricky. I cross-referenced what translators told me with the current Google map of the city, as well as this map of Skierniewice from 1915, from the website Mapster (again, thanks els for the info):

Detail of 1915 Skierniewice Map. Blue lines indicate the boundaries of the hand-drawn map

As best I can tell, the hand-drawn map distorts some dimensions and locations. It draws the river parallel to the downtown blocks, when in fact, the river veers off from the downtown grid at an angle, so it’s much further away toward the southwest than the northwest (see the blue lines on the map). Considering the map in the Yizkor book was drawn from memory, it’s no surprise such inessential details would be distorted. Have you ever tried drawing a map of a place you used to live? It must have been even harder when you didn’t see it on a digital map all the time.

The word labeled “barrack” in the lower left was a tricky one. My cousin Pnina, who remembers some Yiddish from her childhood, translated it as “Kasharen. ” Roberta confirmed that “Kosharn” means “barracks.” I also found an article in a regional newspaper about the demolition of the last barrack buildings in March 2020. They were located in this same part of the city, between the river and the downtown area on 1 Maja Street. Other landmarks that still exist include the Archbishop’s Palace (Pałac Prymasowski) to the north, as well as the Market Square and Senator Street.

I’m still not sure of the location on these maps of the synagogue building that survived and currently houses a plumbing supply store. Based on the street grid, it appears to be the Torah Study Place on the Yizkor map. But what about that building on the 1915 map that appears to be shaped like connected large and small circles and positioned right inside the intersection? I’ve labeled it “synagogue?,” and similarly Pnina suggested the building in that position on the Yizkor map, labelled with a Star of David, might be a synagogue. I wonder though. Might this have been the mikvah? After all, it’s on what’s labelled Mikvah Street, and Virtual Shtetl also says the mikvah was on this street (its contemporary name is Okrzei Street).

UPDATE: My cousin Pnina told me today that the building I labeled “synagogue?” on the first map was definitely a synagogue. The small box in the lower left of that block has a Star of David and above it is written “The Shil,” which means “the synagogue” in Yiddish. So could that mean that the intersection was altered after the war so the synagogue ended up on the opposite side of the street? She also says that the “Torah study place” was probably a school, not a synagogue. If anyone reading this knows anything that might clarify things, please let me know!