I discovered Jewish Warsaw tucked between streets I’ve walked dozens of times. My first surprise was that the apartment I rented in an ugly green socialist-era tower is literally around the corner from Plac Grzybowski (Grzybowski Square), where Jewish life survived into the communist era.

6th floor view of Plac Grzybowski. From the left, a socialist era apartment, All Saints’ Church, modern skyscraper, (at the center) green space, with the site of Jewish Theater behind it and the roof of the Gmina Żydowska behind that, (bottom right) back of building with Charlotte Menora Cafe.

I’ll say more about Plac Grzybowski in a minute, but I was even more surprised when, while mapping out a running route, I saw that I was also just a block away from Nożyk Synagogue, the only synagogue in Warsaw that survived the war. I’m embarrassed to admit that I had never been there before, nor is this the first time I’ve been so close and didn’t even realize it. When my best friend from childhood Kim visited with her father in November 2014, we stayed at a hotel on Grzybowska Street, and were it not for the newer building across the street, we could have seen the synagogue from the hotel entrance. Kim and her family introduced me to Passover Seders, and bagels with lox and cream cheese, and I’m sure they would have loved to see the synagogue. In my defense, the synagogue sits in the green space at the center of the block, with tall buildings all around it. It’s easy to miss. The street access to the synagogue looks like the entrance to a parking lot, and from Grzybowska Street, the only access is via pedestrian walkways.

My friend Kim with her father Sandy and my son Ian in Saski Park, Grzybowska Street in the background, November 2014

This isn’t the first time I have seen a synagogue tucked within the central courtyard of a city block. I wonder what the historic reasons were for that. Regardless, I imagine that in the difficult years after the Holocaust, this location offered the synagogue some protection; only people looking for it would find it. This is also where the Gmina Żydowska—the Association of Jewish Communities—has its offices. I should have come here before. 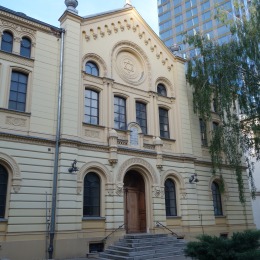 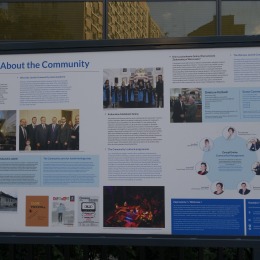 “About the Jewish Community”

Built in 1902, the synagogue is a solid stone rectangle with arch-topped windows all around. Above the front door, two arch-topped tablets contain the Ten Commandments, and above them is a Star of David. The building survived World War II because the Nazis used it as a warehouse. Jews returned to worship there after the War, and at present, it remains the main synagogue of Warsaw, home to the Orthodox community. The offices of the Gmina Żydowska fill a modern addition across the back of the building.

Both times I walked by the synagogue, a few men were inside praying. More people walked by briskly, probably residents of surrounding buildings. Along the edge of the parking area, large information boards contain headlines like “We, the Jews of Warsaw,” “About the community,” and “Kosher…what does it mean?”

All the pieces fit together from my 6th floor balcony. I can see the metal roof of the synagogue’s modern addition. I also look down at the corner of Charlotte Menora in Plac Grzybowski; this is one of four Charlotte Cafes in Poland. They all specialize in French pastries, but this one also includes Jewish offerings such as bagels and rugelach. My friend Beata took me there last summer. She also pointed out the center of the square that has been converted into a shaggy grassland and wildflower garden. Pathways lined with benches lead down to a central fountain. This novel use of space started out as an art installation by Joanna Rajkowska called “Dotleniacz,” which in English means “Oxegenator;” The project was later reworked into its present, more permanent form.  Beata also showed me Próżna Street, the only street in the ghetto where the original buildings weren’t destroyed in the systematic bombing after the Ghetto Uprising in 1943. On one side of the street, the townhouses have been painstakingly restored. On the other, netting covers the buildings to prevent pedestrians from being harmed by falling elements of the crumbling façade. One of the renovated buildings is home to the Austrian Cultural Forum. Some of my Polish friends say they feel uncomfortable about this because of Austrian support for the Nazis.

Park in the middle of Plac Grzybowski

Grzybowski Square is actually shaped more like a triangle. Charlotte Menora and the intersection with Próżna Street are on one long side. At the second long side, a pile of debris peaks above a barrier fence where the Jewish Theater was torn down last year. This theatre continued to operate all through the communist period, offering performances in Yiddish. Posters on the fence announce that the theater will be rebuilt, along with the TSKŻ, which stands for Towarzystwo Społeczno – Kulturalne Żydów, The Social and Cultural Association of Jews. Sophie, whom I met because she shares the last name of my great grandmother, lived in Warsaw until 1968. Her face lit up as she recalled going to youth activities at the TSKŻ. But she, like most of Poland’s remaining Jews, left in 1968 when the government waged a campaign against Jews. That’s also when many of the TSKŻ branches closed. In Warsaw, the organization hobbled along until after the end of communism, and has since been growing once again.

“Coming here, The new location of the TSKŻ. Jewish Theater and Office-Services Building”

At the third, shorter side of the triangle stands the All Saints Church, where Christian Poland asserts itself even in this Jewish part of town. I’ve read that the church was right along the border of the ghetto, and it was where converts to Catholicism living in the ghetto would come to pray. More recently, symbols of Polish nationalism have been placed across the front of the church. Numerous plaques commemorate Home Army soldiers who fought against the Nazi occupation and in the Warsaw Uprising of 1944. These soldiers belonged to companies with names like “Buttress,” and “Brave,” and had wartime pseudonyms such as “Goliath,” “Fisherman,” and “Rooster.” A sculpture of Pope John Paul II stands on the steps leading up to the church, and a monument honoring the Home Army soldiers who produced weapons for the partisans is in the park across the street.

Plac Grzybowski is virtually unrecognizable from the first time I saw it. Marta, a family friend from Warsaw, pointed out the Jewish theatre to me in what I remember as a wide, crowded, dirty intersection with no central green space. It might have been 1990 or 1991, or maybe even 1986. Marta also painted a picture for me of how the square looked still earlier in time, before the war, when the streets were filled with Jews, many of them orthodox men with long beards and black coats, and women wearing wigs or kerchiefs.

The view from my window encapsulates this city–a mishmash of old and new, Catholic and Jewish, nationalism and subversion. Add to this the layers of memory every place contains, along with the energy of a capital city, and you can feel the beating heart of Warsaw.