When I first visited Kutno in 2013, I only stopped for a few minutes on the way from Poznan to Warsaw. I had found a record of my great grandmother on JewishGen, and the original document from the 1860s was in the Kutno archive. I got there too late to see the record (the archive was about to close), but I spoke briefly with one of the archivists, and asked her if any traces of Kutno’s Jewish culture can be found today. She said she didn’t know of anything, except perhaps some fragments of tombstones in the municipal museum.

I returned to that museum in early 2015, and the director showed me their small display of Jewish artifacts. 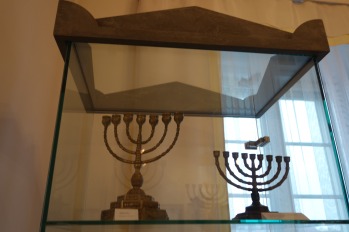 Jewish candleholders in the Kutno Museum

Torah in the Kutno Museum

Fragment of a tombstone in Kutno Museum

Finally last summer, I met some people who have spent years documenting the history of Kutno’s Jews. It turns out a lot is going on. There is a biannual festival in honor of Sholem Asch, a highly regarded Yiddish writer who was from Kutno. There are also commemorative markers at a number of sites around town. And a book was just published—a collection of articles about the Jews of Kutno (Karol Koszada, Elżbieta Świątkowska, Bożena Gajewska, Zaryz Historii Żydów Ziemi Kutnowski, 2016, Kutno: Towarzystwo Przyjaciół Ziemi Kutnowskiej).

I’ve been to the archive a few times now, often enough to break through the reserve of the archivists a couple of times. One told me that school groups sometimes come to visit. “This is a good thing,” she told me “because youths need to know that heritage is not always as straightforward as some people make it out to be. Things change.” She also said that youth don’t necessarily value the past, but seeing the records in the archive helps them to connect with history.

At the Kutno public library, I met Andrzej Olewnik, a librarian with a deep interest in town history. He seemed delighted to meet someone who shared his interest; his whole face smiled as we talked. Pan Andrzej is also a collector, and finds documents associated with Kutno in auctions. He showed me old postcards and photos, including a photo taken in the Kutno ghetto during the Nazi occupation. He also showed me one of Sholem Asch’s business cards, given to him by Asch’s great grandson. He keeps these treasures in protective plastic covers, but slid them out so I could examine them more closely.

Sketch of Kutno synagogue, in Kutno Museum. My shadow reflection is on the far left.

Postcard of the Sugar Factory in Kutno

Passport application of Icek and Ruchla Holeman, 1865. In the collection of the Kutno Museum

The library has a collection of books about Kutno history. One features historic passport photos from the Kutno museum collection, many of which belonged to Jewish residents of the region. It turns out that the museum has other items related to Jewish culture they keep in storage. Some tombstones were found in a sidewalk and brought to the museum. The museum has them in storage, but took photographs of the inscriptions, which are in Yiddish and Hebrew. They are looking for someone to transcribe and translate them.

Another book Andrzej showed me was the Kutno Yizkor book. Yizkor books were compiled after World War II; in them, Jews who survived the Holocaust collected all the information they could about the Jewish population of their hometowns, including historic documents, demographic data, and personal accounts. This one was written in Hebrew—only some Yizkor books have been translated into English. Other books are by or about Sholem Asch, including precious Polish language translations of some of Asch’s plays.

Andrzej showed me digital photos of the prewar synagogue. It was right in the center of the street. Traffic would go around it on both sides. It had columns on one side, and the main entrance on the other. A map from the 1820s shows there was a long narrow green area in front of the building. Across the street from the synagogue there used to be the Jewish school, and behind that the ritual bathes. Andrzej had photos that were taken from the air showing synagogue’s destruction. First the roof was removed in 1940. Later, explosives were embedded in the pillars and the building was blown up.

Grażyna Baranowska, another librarian, organizes the Sholem Asch Festival which takes place every other year. It started as a literature contest, in which contestants competed for prizes for their original writing or their reading of literary texts. Then, it expanded into a culture festival. Next, an academic conference on the life and work of Sholem Asch was added. For the past two festivals, the great-grandson of Asch, David Mazower, has come from England. The next conference is in September 2017 and the festival is in October or November 2017. I’m trying to work out a way to attend this year.

5 thoughts on “Jewish history of Kutno”