On May 1, some friends and I ran 7.4 miles from one side of town to the other tracing the route of the tornado that tore through the heart of Tuscaloosa five years ago. I’d run the same course just a few weeks after the storm. I took photos both times.

With my running buddies after we traced the path of the Tuscaloosa tornado five years after it came through town. Some greenery behind us, but before the storm there would have been tall trees.

In retrospect, it is remarkable to me how little attention I paid to the severe weather predictions throughout the day on April 27, 2011. It was nearing the end of the semester so I was busy with final classes. Besides, National Weather Service warnings, tornado sirens, and weatherman James Spann’s call to “get into your safe place” had become commonplace over my 14 years in Alabama. Of course, when the sirens went off in my neighborhood, I went down to the basement with Ian, who was seven years old at the time. I also checked in on Jeremy, who had been teaching on campus. He was waiting out the storm in the basement of Phifer Hall, which had been a fallout shelter during the Cold War. So I felt reassured Jeremy would be okay there.

Jeremy is a belt and suspenders man, so our unfinished basement has a television, camp chairs, and a battery-powered radio. I watched as James Spann, who knows every town and intersection in Alabama, reported on dozens of tornados tracking through the state.

One of the biggest came straight through Tuscaloosa, leaving a trail of rubble and downed trees six miles long and a half mile wide, running diagonally from one side of town to the other. Until it happened, I would never have imagined it ever could happen. Even as reports came in about the path of the tornado, I couldn’t quite grasp it. In Northport where I live, just two miles to the north, it wasn’t even raining. It was ominously still and an eerie yellow glow filled the sky. The rain came only after the tornado passed

Understanding the scale of the damage was also slowed by the destruction of infrastructure—phone lines and cell towers down, roads impassable. Our family was lucky. None of us were harmed. The tornado ran south of campus. We never even lost power, phones, or Internet. But nevertheless, the storm touched us deeply, and in a way that still affects us. 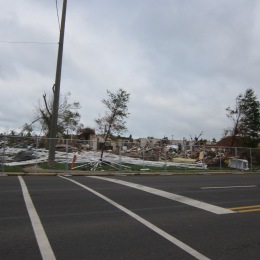 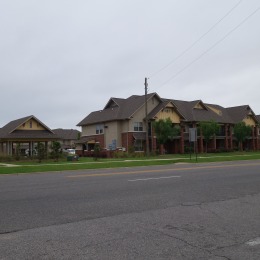 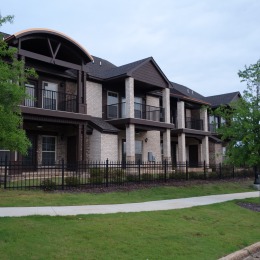 New apartments where Wood Manor used to be 2016

Fifty-three people died in Tuscaloosa (and 252 in the state). Considering the extent of the physical damage, we’re lucky the number was not much higher. In an instant, 12% of the city was destroyed. Follow this link to a video of the tornado, filmed from the parking lot of University Mall. The voice at the beginning is James Spann reporting on the track of the storm.

The experience gives me a glimpse of what it might have been like to endure the trauma of war. In an instant everything is changed. The physical world that seemed so permanent is suddenly obliterated. And it doesn’t make a lot of sense why some people survived and others died. But as horrible as the storm was, it can’t compare to the scale of World War II. And I can only imagine how much more emotionally damaging it would have been to face a human threat rather than a natural one. The former requires accommodating the fact of human agency—that people chose to wreak that destruction on others.

The five-year-anniversary run left me unsettled. I was transported back to the shock of the days following the storm, when the magnitude of the destruction sank in. I passed by the places where people died—Rosedale Court, a housing project that was nearly leveled; Charleston Square Apartments, parts of which lost all but their foundation while others stood battered but whole; the corner of 6th Avenue and 27th Street where a University of Alabama student was sucked out of her home and dropped in a field across the street. I also passed by the places where I helped clean out destroyed homes together with a crew of two-dozen anthropology faculty and students. 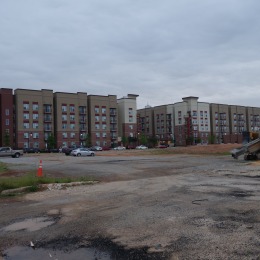 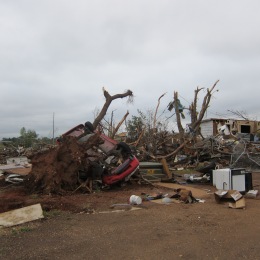 For days, we all lived the storm. It seemed the whole city came together to give food, shelter, and comfort to those who needed it. But after a period of intensive engagement, I had to block it all out. I didn’t want to see any more videos of the twister. I even avoided driving through the tornado zone because each time, my shock was renewed. I couldn’t get used to the long vistas, more like the deserts of the southwest than the southeast’s dense forests. Without the tall trees dividing them, places that used to seem so far apart appeared to be much closer. The blue water tower near Rosedale Court and the Druid City Hospital became landmarks visible for miles. Even Forest Lake stood out as a blue patch surrounded by barren land. 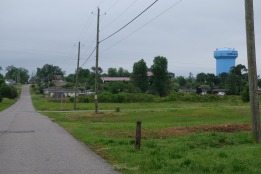 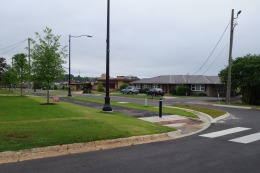 Today the city is rebuilding. Shopping centers and apartment complexes are filling in the corridor along 15th Street and McFarland Boulevard. Greenery has returned to the landscape, though it will be decades before the trees grow tall enough to once again block the view of the water tower and the hospital.

Five years after the storm, social and economic inequalities continue to be inscribed in the landscape. The fancy houses on the hill were rebuilt almost immediately, while just a few blocks away, whole city blocks remain empty fields. Stores and shopping centers east of the university have not returned. But there are also some signs of change. Subsidized housing, functional brick boxes before the storm, have been replaced by gorgeous two-story buildings with steeply pitched roofs. The new Alberta Elementary has been designated an arts magnet school. A bike trail will wind through the heart of town. Plans have just been revealed for a new park with three fountains. You could call it a rebirth. Still patchy. But remarkable considering the magnitude of the destruction.

The scar left from the tornado is fading. See more here: https://weather.com/storms/tornado/news/tuscaloosa-tornado-scar-fades