Although I knew the former synagogue still stands in Radymno, had to look several times before I actually found it. I’ve visited for years, and yet my friends never even told me the town had a prewar Jewish population. But until June, I never thought to ask them about it, either.

When I finally did ask, my friend couldn’t tell me much. She repeated a common refrain, especially in southeastern Poland: Jews used to say “nasze kamienicy, wasze ulicy” [“our buildings, your streets”]. It’s not clear that any Jews ever actually said this, but nevertheless, this is often what is remembered about them—Poles may have been the majority but Jews were richer. It’s a telling way of marking the distinction between Poles and Jews. Rather than all residents being regarded as Poles of various religions, Jews remained separate. Moreover Jews are remembered as being complicit in asserting their difference, and indeed their superiority. My friend didn’t mean it this way, but I’ve commonly heard this expression deployed as a justification for why Poles didn’t like Jews. Not only were Jews the property owners, they rubbed it in.

Jewish property ownership poses different challenges today. Some current residents fear prewar owners will return to claim what was theirs. My friend told me about two men who came to Radymno a few years ago and looked at some buildings that had once belonged to Jews. She also described a building in the center of town that is falling apart, but nothing can be done about it. It can’t be torn down because it is a historic structure, but no one will invest in its renovation for fear they will lose possession of it if the owner comes back. She also mentioned another property, a plot of land surrounded by fields whose last owners were Jews. The town hasn’t pursued a clarification of ownership because it isn’t worth enough to hire a lawyer and try and collect the few zloties of tax owed on it each year. So it just stands fallow. I suggested the owner is probably dead. She said of course, it’s been so many years. I clarified there probably aren’t even any descendants, and she responded “of course, because of what happened to Jews.” She didn’t elaborate, nor did she use the words Holocaust, murder, or genocide.

My friend’s mother-in-law had heard her mother’s stories about Jews. She grew up right next door to where they live now. Still, when we asked her about it, she responded she doesn’t know much. She was too young, and her mother didn’t tell her much. She remembers her mother complaining about the sound of the calves at the slaughterhouse across the fields. Kosher law demanded that they be killed with a single knife stroke, and with an empty stomach. Her mother could hear the calves crying in hunger as they awaited slaughter. There still is a slaughterhouse in the same spot, but it has been rebuilt and expanded. At first, my friend’s mother said it used to be owned by Jews, but then she said she wasn’t sure. Jews definitely used it, even if they weren’t the owners.

Her father opened a grocery store in Jarosław, a nearby town. All his neighbors were Jewish shopkeepers. He had to give up the business after a year and a half because they lowered their prices to the point that he could not compete.

Her mother also told her how all the Jews were collected by the Germans and taken to the cemetery where they were shot. She mourned the loss of two young pretty Jewesses, whom she knew because they did seamstress work together.

My friend’s mother-in-law said some Jews and Poles się przyjaźnili [were friendly with each other]. They lived side by side.

She also recalled where the Jewish cemetery was, not far from the water treatment plant.

My friend drove me down a dirt road past the plant, but there was no cemetery. When the road narrowed to two wheel tracks in tall grass, we turned around. My friend pointed to a stand of trees in the distance, saying she thought the cemetery was there. She tried to find someone at the water treatment plant but no one responded. From there, she stopped at a store, but chanced on a man who lives in a nearby city.  The young men working at the car wash knew nothing about the cemetery, either. She finally found an older woman who pointed to a different, less traveled dirt road. We drove up it, but it didn’t get us to that stand of trees. My friend kept looking for a road leading in that direction. I can’t help wondering if maybe at some point in the past she hd been told the cemetery was there.

We drove past the slaughterhouse her mother-in-law had mentioned. It’s a big operation, rebuilt and expanded since the war. The building closer to the road, essentially a box shape, is probably the oldest.

From there, we took a back road up the hill into town and I finally got to see the former synagogue. It is now a beverage wholesaler. My friend’s uncle lives next door. I took some photos while she went to ask him if he knew where the cemetery might be. 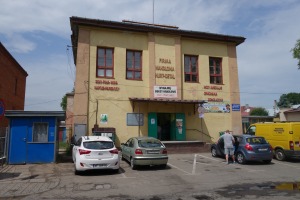 The front of the synagogue is an imposing two-story square façade that has been renovated, leaving no clear elements of synagogue architecture. From the back, though, the bricked-in semicircular tops of the former synagogue windows are visible. Through windows, you can also see staircases on either side that used to go to the “babiniec,” the upstairs balcony for women. My friend’s uncle used this term when he described it to us, so clearly he knows a bit about the building’s former life as a synagogue. He said nothing has been added to the building. It still has the same footprint, and it stands at its original height. I asked him how he knows, and he simply responded, “after all, I live next door.”

The synagogue from the back 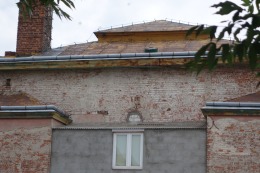 Brick arches used to be the tops of the synagogue windows.

My friend’s uncle also knew how to get to the cemetery. He said he last went there over 30 years ago. As a high school student and a young man, he and his friends used to go there sometimes to have fun (in other words to drink). He remembers some tombstones were still standing, though many others had been brought to the river where people would wash their clothes on them. The writing was still visible on them, but later, the stones fell apart. Today there is nothing left. 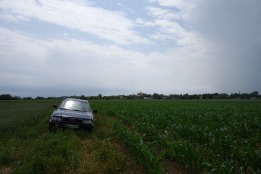 Looking back toward Radymno from the cornfield beside the Jewish cemetery

The overgrown site of the Radymno Jewish cemetery.

He took us past the slaughterhouse and up a different dirt road. It petered out in a cornfield, right beside the stand of overgrowth and trees that Jasia had kept pointing toward. Still, we still couldn’t reach it because of a deep gully that separated it from the cornfield. Besides, the overgrowth would not have been penetrable without proper footwear, pants, and probably a machete. I suggested returning in the winter might be best.

At least I know the site to return to.

3 thoughts on “Tracking Down Jewish Radymno”