My great grandparents lived the last years of their lives in Włocławek, a city on the Vistula downriver from Warsaw. I don’t know exactly when or why they moved there, but it was a city that experienced rapid industrialization and growth in the early 20th century. During this time the Jewish population grew to about 20% of the city’s residents. Tomasz Kawski, a professor in the nearby city of Bydgoszcz, has posted an extensive history of Włocławek’s Jews on virtual sztetl. He also showed me around the city in February.

Historically, Jews concentrated around ten streets in the center of town, including Tumska Street which runs from the Old Rynek to the cathedral.[1] This is where Pinkus Kolski and his wife Rachel (my grandfather’s sister) lived and had their store. It was one of the central shopping streets in the city.

When I visited Pini in Israel (he, too is Pinchas like his grandfather, though he has changed his last name to Doron) he and his wife Pnina told me about visiting Włocławek in the 1990s. Here is a photo of Pnina, her mother, and daughter in front of 15 Tumska Street where Pini’s grandparents lived.

My cousins in front of Pinkus and Rachel Kolski’s house on Tumska Street, Włocławek

And this is what Tumska Street looked like the week after I returned from Israel. 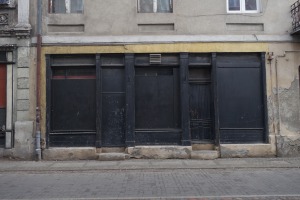 Tumska Street is in total decay. Some of the abandoned storefronts have prewar wood paneling that hints at the street’s former glory.

Other houses have collapsed into a pile of rubble. Number 15 is gone completely. 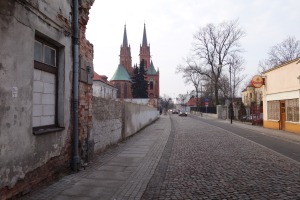 A wall stands where 15 Tumska Street used to be. The cathedral is in the background.

I asked a few people why this neighborhood is in such disrepair. I was told the whole city is struggling economically due to the closing of many industries since the fall of communism. About 20% of residents are unemployed. Even before then, residents were moving out of the center and into newer homes and apartments in the outskirts of the city. Also, most of the former Jewish properties were nationalized under communism. In recent years, laws have changed to allow former owners to reclaim their properties, so buildings whose ownership is uncertain or under dispute have been left alone. No one wants to invest in them and risk that someone with a valid claim over them might appear and take possession of them. In fact, communal, city-owned properties nearby are better cared for than those on Tumska Street.

1 thought on “What happened to Tumska Street?”