Regions in Poland still reflect the different administrative regimes within the Russian, Prussian, and Austrian Empires that controlled Polish territory from the late 18th century until World War I. The experience of Jews in Poland varied across these boundaries, as well. It’s a bit like the continued influence of North-South differences in the US, particularly with regard to African Americans’ experiences. History can dig channels that influence the flow of events far into the future. 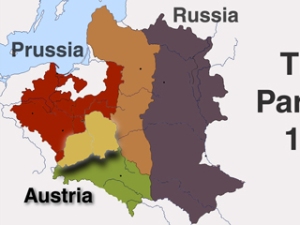 Map source and more information about the partitions of Poland: http://www.britannica.com/EBchecked/topic/466910/Partitions-of-Poland

Wielkopolska Province, where I’m living, was under German/Prussian control during the period of partitions. Older residents in particular tell me this German influence has contributed to the region’s sense of order and relative economic success. Historically, regional residents were more interested in taking pragmatic steps to improve daily life (what has been called “organic work”) than in romantic battles for independence that were destined to be defeated. Some refer to this region as “Polska A” in contrast to the more backward and poor “Polska B” in eastern Poland. Some also complain that in recent years state and EU funding have tended to go to other regions of Poland, and that this is a residue of outdated perceptions that Wielkopolska is the least in need of development aid as well as distaste for the German influence that makes some consider the region “less Polish.” Channels can be redirected.

The highest percentage of Jews in Wielkopolska dates back to the first half of the 19th century. Jewish outmigration after then has been attributed to a number of factors. The first is economic; Jews saw more opportunities for themselves in larger German cities. They had often been educated in German schools, spoke German, and could move west without crossing political borders. Second, the German state offered rights of citizenship for ethnic and religious minorities. Many saw more opportunities to study at universities and build careers or businesses in what they perceived as the more developed west. Third, especially from the late 19th century and continuing when Poland regained independence after World War I, Jews were escaping growing Polish anti-Semitism. The National Democrats, with their platform defending the purity of the Polish state against ethnic and religious minorities, were particularly strong in Western Poland. Many Jews continued from Germany to the United States, chasing the promise of greater social equality as well as economic opportunities. In the interwar period, Palestine became the preferred destination.[1]

By the time World War II started, Jews constituted a tiny proportion of the population of cities like Poznan and towns like Wronki. In Poznan, there were maybe 2000 Jews, while in Wronki there were perhaps 30. This early emigration and the small numbers affect the kind of memory work that can be done in Wielkopolska. Many Jewish institutions (hospitals, schools, and even synagogues) had already closed their doors well before the war; Jews were less visible for the Poles who remember prewar life. There is another issue that has tended to limit Polish scholarship about the Jews of Wielkopolska. They often identified more closely with German culture than with Polish. This is visible even in the material fragments that have been recovered. I am thinking for instance of tombstones commonly inscribed in Hebrew on one side and in German on the other.

So overall, the fragments of Jewish life in Wielkopolska are older, the memories are more distant, and fewer residents have had direct experiences with Jews and Jewish culture. These factors pose a challenge to heritage work—it can be harder to find artifacts worthy of preservation, and more difficult to convince local residents and funding sources that these stories need to be told.

[1] I’ve read and talked to a lot of people about this, but thanks especially to Tomasz Kawski for explaining it so clearly.

2 thoughts on “Jews in Wielkopolska”