I have often remarked how the synagogue in Lesko is larger than the Catholic Church. It stands as a silent reminder of the prewar Jewish majority. Lesko is a small town of about 6000 residents on the edge of the Bieszczady Mountains in the southeast corner of Poland, and the site of my ethnographic fieldwork since 1992. The Bieszczady region was home to a multicultural population until the devastation of the mid-20th century turned it into Poland’s underpopulated, ethnically homogenous “wild east.” The Jews became victims of the Holocaust, while many Ukrainians and Poles escaped the German-Soviet front during the war. After the war most of the remaining Ukrainians were removed to the Soviet Union or the land acquired from Germany by the postwar Polish state, and Poles were resettled from across the Soviet border or emigrated voluntarily from overpopulated communities in western Poland. 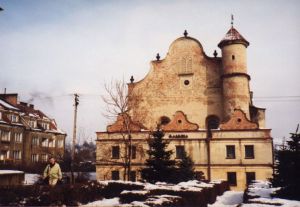 While in Lesko last week, I asked some of my friends what they know about the town’s Jews—is there anyone who can tell me what happened before and during the war? Did any Jews survive? Are there any Jewish descendants left in the area? Ever since embarking on this investigation of Jews in Poland, I have wanted to find out why the topic of Jews has come up so rarely during my frequent visits to Lesko over the past twenty years. Sure, I was shown the synagogue and the Jewish Cemetery on my first tour of the town, and rarely, someone mentioned that certain buildings used to belong to Jews, but that’s where it ended. Unlike in Krakow, where having a Jewish ancestor became for some a badge of distinction, in Bieszczady no one ever mentioned their own or anyone else’s Jewish heritage. It simply was not talked about. Or maybe I never asked?

Based on my initial conversations last week, there is still a lot of reluctance to think about, let alone talk about Lesko’s Jews. But a few people gladly engaged with the topic.

First the reluctance. Often there is a pause, and then the response, “No, there is nobody left. Or at least they don’t admit it (nie przyznają się).” I got the same response in places like Lutowiska, which was over 60% Jewish before World War II. In Lutowiska, nearly all the contemporary residents have roots in other parts of Poland or in the former Soviet Union (borders were not fixed there until the 1950s), which might explain the general ignorance about the village’s history. Many of Lesko’s residents arrived after the war, but there is also a good number of autochthonous families who remain in the town.

The one person several people suggested might be willing to talk to me was Romuald Zwonarz, whose father Józef saved the lives of several Jews by helping them hide from the Nazis for nearly two years. Fortunately, pan Romuald agreed to meet me. Over a long conversation, he told me his father’s story, mostly by sharing published accounts with me, annotated with marginal comments and sticky notes that correct errors and point out inconsistencies. He did not want to be recorded because he aspires toward a perfect historical record and is too painfully aware of the false starts and misremembered details that taint spoken language. Still, he is proud of what his father did.

Józef Zwonarz and his wife Franciszka

The story is told in rich detail in Bitter Freedom, written by one of the survivors, Jafa Wallach shortly after she settled in the United States. Jafa wrote it to her daughter Rena to explain their wartime experiences and why they left Rena with strangers from the age of four to six. It’s an amazing account of an awful story. Basically, Jafa along with her husband Natan, who was a doctor, her two brothers, and toward the very end her sister, all hid under Józef’s mechanic workshop in a crawl space they dug themselves. It had earthen walls and was barely tall enough to kneel in with your head against the ceiling. Even more extraordinarily, the workshop was situated between Gestapo headquarters and the Ukrainian police offices in the center of town. Józef worked long hours repairing the occupiers’ vehicles, and then would sneak water and food to the hidden Jews at night. He also helped to find a safe place for Rena with a forest guard in a remote hut several kilometers from Lesko. Józef was recognized in 1967 as one of the Righteous among Nations, though he could not receive his medal until 1980.

From Romuald and his family’s story, I learned there was a work camp for Jews across the river from Zagórz. Lesko’s Jews were taken there before being killed on the spot or at the concentration camp at Belzec. Jafa only knew of a few who survived in hiding or with false (Aryan) papers. Romuald mentioned a few more he is aware of. Out of 30,000 Jews in the region before the war, only eighty survivors gathered in nearby Sanok after it ended. Those who came out of hiding were not made to feel welcome. As Jafa explains, some asked them “What are you doing among the living?” while others just looked with expressions of indifference.

I count on it that on future visits, I will learn of other people who remember Lesko’s Jews and are willing to talk about them.

5 thoughts on “Only a few survived in Lesko”