The Atlas of Memory Maps exhibit features maps drafted by non-experts in an effort to preserve the memory of their hometowns, which had been destroyed or radically transformed during and after World War II. Most were published in Yizkor books, memorial books compiled by Jewish survivors. The exhibition is mostly in Polish, but includes some English-language information. The maps contain notations in Yiddish or Hebrew. This virtual exhibition by Grodzka Gate-NN Theatre Center includes maps from Poland, Belarus, Ukraine, Lithuania, Moldavia and Slovakia.

Here is the map from the exhibition:

Map of prewar Skierniewice drawn from memory by an unknown author

Comparing it with a contemporary map, it’s hard to figure out exactly how they match up. Maybe someone who can read Yiddish can help me by translating the words on the map. Please leave me a comment if you do! I think the rivers on each map are the same, and the space marked with crosses in the bottom center of the prewar map may be the green space marked “Church of St. Stanislaus” in the bottom right of the contemporary map.

Map of contemporary Skierniewice. The site of the synagogue is marked with a black dot surrounded by a grey circle. Source: Google Maps 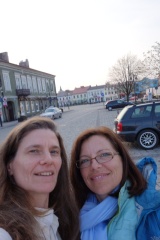 Krysia and me in Skierniewice, the birthplace of our great grandfather. April 2013

With cousin Bob, the former synagogue in the background–it’s now an electrical supply store

The synagogue, though the exterior is well maintained, now houses an electrical supply store. On the road running parallel to the river, a few tombstones have survived in the old Jewish cemetery, but they are in what is currently the backyard of a private residence. I wonder if this cemetery was included on the prewar map? The newer Jewish cemetery contains  many more surviving tombstones as well as commemorative markers outlining the history of the town’s Jewish population. It is located beyond the bottom edges of these maps, off a dirt road a short ride south of town.

Located in Lublin, Grodzka Gate-NN Theatre is one of the oldest and most active Jewish heritage organizations in Poland. About its origins, Tomasz Pietrasiewicz writes:

The changes brought about by the fall of communism in Poland in 1989 initiated the process of regaining Memory by the Polish society, and Lublin was among many Polish cities which had to face their forgotten past.

When we began our activities at the Grodzka Gate [which historically separated the Jewish and Catholic districts of the city] in the early 1990s, we knew nothing about the history of Jews in Lublin. We were not aware that the enormous empty space on one side of the Gate conceals the Memory of the Jewish Quarter. We did not realize that the Gate leads to the non-existent town, the Jewish Atlantis.There is a huge parking area, lawns and new roads where there used to be houses, synagogues and streets. A large part of this area, including the foundations of the former Jewish houses, was buried under a concrete cover, and the memory of those who lived here was hidden as well. You cannot  understand Lublin’s history without these empty spaces near the Gate. For the NN Theatre, they have become a natural setting for artistic actions, Mysteries of Memory, which uncover the memory of the past while mourning the victims of the Holocaust. (from “History of Grodzka Gate-NN Theatre“).

More information about the exhibition and Grodzka Gate-NN Theatre can be found at the following websites: