November is the month when I think about death the most. It starts with the Catholic holidays All Saints Day (November 1) and All Souls Day (November 2). It’s the month when the leaves fall from the trees and the long nights settle in. But it’s also the anniversary of my more personal encounters with death. My brother Ron’s accident was a few days before Thanksgiving in 1990. Nine years later, on the Friday after Thanksgiving, my dad had his accident while visiting me in my new home in Alabama. Both were injured in a fall. Both were in the hospital for two to three weeks before dying.

I think we all learned how to deal with this kind of loss from the first experience. The first time, no matter how dire the news was from New York, I held on to the certainty that Ron would pull through. I let my mother persuade me that it made no sense to come home right away, when he was still in such bad shape. I should finish the semester in graduate school in San Diego and come home as scheduled on December 11 when Ron would be well enough to appreciate my presence. I think she was trying to protect me from the shock of his injuries. And I believed her because she was my mom, and because it was easier, and because the prospect of him dying was inconceivable. But he didn’t last that long and I never got to see him alive again.

The second time, we knew not to assume anything. We held on to hope until the last moment, but we were more prepared for Dad’s passing. My brother Chris was already there, but my other brother Wiley flew in from California. We all sat vigil, visiting Dad every chance we could get and supporting each other in our grief.

So while I love Thanksgiving, this is also the time of year I think about my brother and my father. And I grieve for them all over again.

Especially after Ron died, I struggled with grief. There didn’t seem to be any way to talk about it or express it publicly. I think this is particularly difficult in California, a place that celebrates life and youth. The cemeteries are hidden from view or turned into parks. That’s why it resonated with me to spend All Saints Day in Poland. During this holiday, families visit their relatives in the cemetery (those who are living and those who are dead). They clean the graves and decorate them with chrysanthemums and candle lanterns. At night, the whole cemetery glows with candlelight, and throngs fill the cemetery pathways. Death isn’t hidden away, and the people you love remain a part of your life even after they die.

Whenever I’m in Warsaw, I make a point of visiting my step-grandfather’s grave in Warsaw’s Powązki Cemetery. I clean the stone, place flowers, and light candles. This is the closest thing to a relative I have in Poland, and one of the only remaining traces of my family’s lives there. Last year was the first time I was able to make it there on All Saints Day. I went with my son, who by now is familiar with the custom of visiting, cleaning, and decorating graves. He likes to watch the candles burn.

The first time I went to Powązki was in 1986, during my first visit to Poland. I spent a couple of days with Marta, a professor of American literature who had worked as my grandmother’s companion back in New York. She took me to my grandfather’s grave. She knew where it was because my grandmother had told her where to find it. She made a point of visiting every time she visited her own relatives in the cemetery, and she kept the grave tidy for Babcia.

Last August, when I was at Powązki with my brothers, I noticed what looked like a synagogue on the other side of the wall, right there near my grandfather’s grave. Looking at a map, I realized that the Okopowa Jewish Cemetery abuts Powązki (a Catholic cemetery), as does the Evangelical Cemetery. Either I had forgotten this, or simply never knew how close they all were to each other.

On November 2, All Souls Day, I visited Okopowa with my friend Beata. She has lived in Warsaw for close to 20 years, but had never been there before. Beata said she had been wanting to visit the Jewish Cemetery for a long time. We parked in front of her friends’ glass high-rise apartment building right across the street from the entrance.

The regular admission fee was waived for the holiday. A good number of people strolled the alleys. A man in a yarmulke led a tour. Beata, Ian, and I made our way past a reconstruction of the original cemetery gate and a low wall made of the fragments of tombstones. The wall also includes commemorative plaques for Holocaust survivors who emigrated and were buried elsewhere.

The reconstructed gate and wall constructed of fragments of tombstones 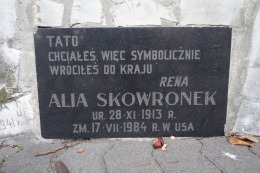 “Father, You wanted to, so you symbolically returned to your country.” Alia Skowronek died in the USA

Okopowa remains an active burial ground, and people have continued to be buried there after World War II through to the present. The cemetery shows signs of ongoing attention and care, though broken and overgrown stones fill the vast expanses beyond the main walkways. There are many large tombstones and some family plots, suggesting affluent families. Even older tombstones include Polish as well as Hebrew inscriptions, and some have writing in Polish only. This signals to me a higher degree of assimilation in Warsaw relative to the smaller towns I have visited in central and eastern Poland (Lesko, Żychlin, Lutowiska, Skierniewice, to name a few) where most if not all inscriptions are in Hebrew. It’s different in western Poland, where tombstones were commonly in both Hebrew and German.

Off to one side, I found an area partially filled with older tombstones that have clearly been reset because they are all upright and evenly spaced in rows. These have the larger lettering characteristic of tombstones dating from an earlier period. They fill about 1/3 of the space; the remaining 2/3 are covered in weeds. Along the opposite wall more tombstones are stacked as if they are waiting to be set out in rows. I wonder what is being done here. Might these stones have been recovered from other locations?

Tombstones waiting to be set in rows? Where did they come from?

The cemetery also contains an area filled with symbolic graves for the victims of the Holocaust, and another large round depression marked by a ring of rough stones painted white with a thin black stripe through the middle. This is where victims of the Warsaw Ghetto are buried. Numerous candles were lit on and below the plaque explaining this, as well as on some sand fill that seems to have been recently placed in part of the depression. Some of the candles are in cans with Hebrew writing on the outside. I’m told these are from Israel. 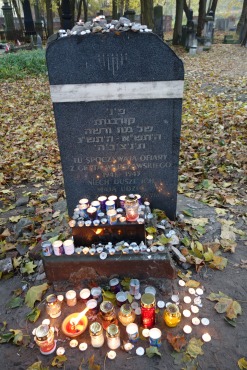 “Here rest the victims of the Warsaw Ghetto 1941-1943” The plaque looks like a tombstone. The top is covered with stones and lighted candles cluster around its base

Several headstones are adorned with white and red ribbons and Polish flags with “PW,” the symbol of the Polish Underground Army. These are soldiers who died during their service in the war, clearly both Jews and Polish patriots. Some resisted the pressures to identify as just one or the other. They were both, despite the antisemitism, despite Hitler. 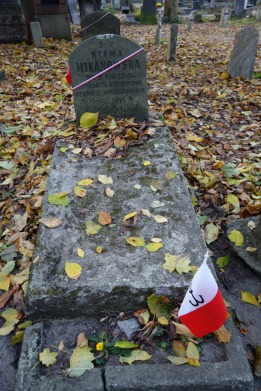 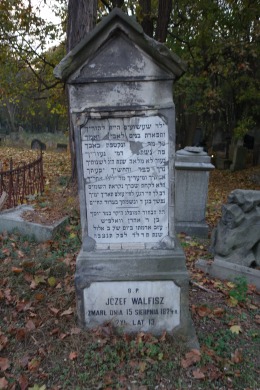 I passed the grave of Józef Walfisz, who died 15 Aug 1874 at the age of 13. Walfisz was my great grandmother’s maiden name. Could this be a relative?

We had to leave because a man told us the cemetery closes at 4 PM. I understand why. Dusk was falling and the cemetery has no electric lights. A few candles glowed, but not enough to light the way as in the Catholic cemeteries on All Saint’s Day.

The Okopowa Cemetery evokes the rich life of Jews in Warsaw—it’s a physical reminder of their numbers and their affluence (and their level of assimilation). It also embodies how Jewish life in Poland was cut off, brutally and decidedly. But I also see here evidence of continued care and use, something that is not present in places where no Jews are left to visit their relatives and eventually be buried themselves.